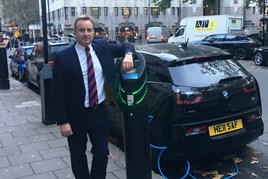 A push to accommodate greater parking capacity and EV charge points could put pressure on car retailers to develop even larger dealership facilities - putting them on a collision course with house builders.

A new report from Automotive Property Consultancy (APC) is set to explore the impact of the shift to electric vehicles on franchised operators as the proportion of EVs in the UK’s car parc rises from around 2% to to closer to 20% by 2025.

Insight suggests that dealers could be put "direct competition" with other land users, including housing developers bouyed by the 2017 Autumn Budget's plans to liberate urban sites for the building of new homes.

Bill Bexson, managing director of APC, said: “It’s no secret that the bulk of dealers’ profits come from aftersales services rather than new vehicles sale.

“Aftersales for EVs necessitates a substantial addition to existing facilities. In the short-term, dealers will need to service conventional vehicles, EVs and hybrids – highly complex beasts combining both technologies on one platform – with the latter currently accounting for 60% of the EV market.

“From a property perspective, the need to service these different vehicles will increase the pressure to find larger sites, particularly as existing sites are often too constrained to satisfy current franchise standards.

“However, this is not an easy fix. There is often competition for sites from residential developers, discount supermarkets, and the booming logistics/industrial market.

“Car showroom use in planning terms is considered “sui generis” - “in a class of its own” - so securing planning permission for either expansion or redevelopment can be complex and time consuming.

“Attempts to secure relocation sites brings motor retailers into direct competition with other users who can secure greater development densities that drive land values beyond the viability reach of motor retail.”

In this week’s 2017 Autumn Budget the Chancellor of the Exchequer, Philip Hammond revealed plans to prioritise urban brownfield sites for residential development, with plans to force developers holding onto land to sell under a compulsory purchase order.

The move is likely to heighten demand for sites that might otherwise have been snapped up by car retailers, but could also prompt a fall in prices as developers target an earlier sale.

Bexon said that the expanding footprint that needs to be a consideration of dealers looking towards and EV-dominated future will be driven by a need to invest in charging and parking infrastructure.

He said: “There are issues of standardisation to address since, potentially, each manufacturer has a different connector and each model a different charging regime.

“Dealers tied to one manufacturer are unlikely to have this problem, but for others site size and configuration will be an issue.

“There may also be a need for improved power storage facilities. Dealers may want to introduce renewable energy provision, through solar panels for example, and possibly even install small sub-stations to store and capture National Grid power during off-peak periods. Again, this has implications on commercial space.”

Going forward, Bexton confirmed that there will be greater competition for larger sites.

He said: “Investment is necessary in specific EV skills for aftersales service; plant and equipment specific to EVs and parking and charging infrastructure on site.

“This will put smaller sites under greater pressure and force the acquisition of bigger premises.

“Consolidation of dealership networks over the last decade or so has already resulted in vendors occupiers occupying fewer and bigger sites. The shift to electric vehicles will fuel this further.”

APC’s report, ‘Electric Vehicles – The Impact on Property’, will be available at www.automotive-property.com from November 27.