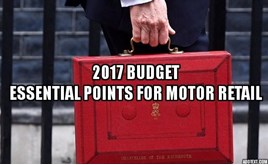 Some of the key points in the latest Budget that may impact motor retailers and their employees:

The government will delay implementing a series of National Insurance Contributions policies by a year, including the abolition of Class 2 NICs and reforms to the NICs treatment of termination payments.

From April 2018 there will be no BIK charge on electricity that employers provide to charge employees’ electric vehicles.

A formal skills partnership between the government, the Trades Union Congress and the Confederation of British Industry, will develop the National Retraining Scheme, which will target short-term action in sectors with skills shortages, initially in digital skills.

The treasury has agreed a £2.3 billion support package for businesses over the next five years.

This includes bringing forward to April 1, 2018, the planned switch in indexation from RPI to the main measure of inflation, CPI.

In addition, it will increase the frequency with which business properties are revalued to every three years from the current five year interval, following the next revaluation in 2022.

Hammond said this will ensure the revaluation’s impact is less severe for businesses.

To enable this, ratepayers will be required to provide regular information to the Valuation Office Agency about who is responsible for business rates and property characteristics including use and rent.

The Government will consult on the implementation of these changes in the spring.

Legislation will address the so-called ‘staircase tax’, where businesses in offices which share building, and are linked by a communal lift, corridor or stairs, are currently charged more for business rates.

Affected businesses will be able to ask the VOA to recalculate valuations so that bills are based on previous practice backdated to April 2010.

Fuel duty was frozen for 2018-19, and the government will review whether the existing fuel duty rates for alternative fuels to petrol and diesel are appropriate. It will end the fuel duty escalator for LPG.

A supplement on new diesel cars first registered from April 1, 2018, will ensure their First-Year Rate is calculated as if there were in the VED band above.

It will apply only to diesel cars which are not certified as meeting emissions limits in real driving conditions, to RDE2 standards.

VED generally will increase in line with RPI inflation from April 1, 2018, for vehicles registered before April 2017, as will the First Year Rates for new cars.

To support the transition to zero emission vehicles, the government will regulate to support the wider roll-out of charging infrastructure; invest £200 million, to be matched by private investment into a new £400 million Charging Investment Infrastructure Fund; and commit to electrify 25% of cars in central government department fleets by 2022.

The government will also provide £100 million to guarantee continuation of the Plug-In Car Grant to 2020 to help consumers with the cost of purchasing a new battery electric vehicle.

The government wants to see fully self-driving cars, without a human operator, on UK roads by 2021. The government will therefore make world-leading changes to the regulatory framework, such as setting out how driverless cars can be tested without a human safety operator. The National Infrastructure Commission (NIC) will also launch a new innovation prize to determine how future roadbuilding should adapt to support self-driving cars.