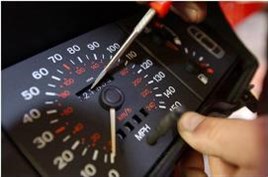 Record numbers of PCP agreements could prompt a car clocking crisis in the motor trade as motorists look to shed miles in a bid to beat the deal’s final balloon payment.

Rupert Pontin, director of valuations at Cazana, echoed the sentiments of the NFDA’s head of business development, Louise Wallis, in warning retailers that one-in-16 used cars now has a clocked mileage – a 25% increase in cars from 2014 to 2016.

Cazana is forecasting this trend to continue, with the number of new vehicles purchased through PCP reaching in excess of 82% last year.

Pontin expressed concern that a significant number of new vehicles purchased through PCP are returning to the used car market with incorrect mileage figures, as consumers turn to mileage correction companies to ensure they do not exceed the terms of their finance agreements.

Pontin also believes that clocking is no longer being associated with fraudulent car dealers and sellers, but with supposedly finance-savvy consumers.

He said: “Throughout the past ten years, there have been calls for the trade to clean up its act when it comes to clocking, and these words have been heeded.

“However, what we are starting to see is more consumers deliberately clocking their cars to ensure they do not go over the terms of their PCP agreements.

“As finance becomes the most common option for vehicle purchasing, we are seeing an increase in clocked vehicles returning to the used car market.”

Cazana is urging the industry to remain vigilant when checking used vehicles for false mileage figures.

While the motor trade faces high fines and penalties when caught clocking vehicles prior to sale, there is little to deter consumers. Introducing fines and stricter laws against clocking for consumers could reduce these instances.

The NFDA warned of the issues and highlighted its campaign to make mileage adjustments to vehicles’ odometers illegal at the recent VRA Seminar in Leicester.

Wallis told the seminar: “You’re getting the consumer that is nearing the end of their PCP contract, facing a mileage excess of three to 5,000 miles and an associated fee.

“They can search the internet, find someone offering a car clocking service and have the work done on their driveway for probably in the region of £50 – no questions asked – to avoid the charge.

"Some people might have their car clocked several times, ahead on an MOT or service, to maintain a consistent vehcile history."

Wallis said that the NFDA estimated that the issue was costing dealers and subsequent owners £1.5 billion-a-year.

While clocking is not in itself illegal, prosecutions can be made relating to the misrepresentation of a vehicle for sale, Wallis said.

In 2014, just nine car retailers were prosecuted, however.

Wallis added: “We believe the legislation needs to be changed. There’s no question, we need mileage adjustments to be banned in the UK just as they are in the US and Ireland.”