New car sales volumes fell by 6.3% as the market started 2018 with the lowest January total since 2014, prompting the SMMT to urge government to drive fleet drivers back into diesel cars.

Business registrations plummeted by 29.7% and private registrations by 9.5% during January as a total of 163,615 cars left showrooms.

The decline of diesel-fuelled vehicles continued, with a fall of 25.6% – taking the fuel’s market share to 35.9% – as petrol and alternatively-fuelled vehicles recorded rises of 8.5% and 23.9%, respectively. 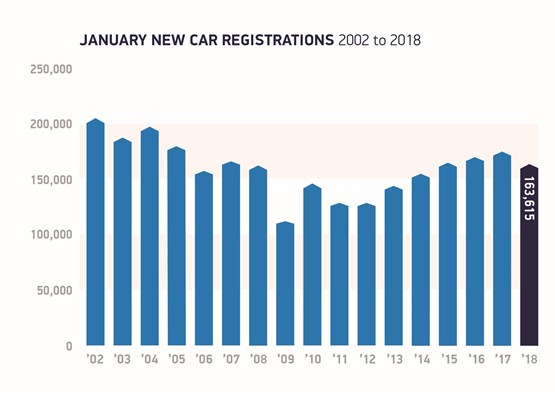 Despite the anti-diesel sentiment, which has gripped the market in recent months, the January decline in sales prompted SMMT chief executive Mike Hawes (pictured) to attempt to encourage business users to boost diesel sales.

Hawes said: “The ongoing and substantial decline in new diesel car registrations is concerning, particularly since the evidence indicates consumers and businesses are not switching into alternative technologies, but keeping their older cars running.

“Given fleet renewal is the fastest way to improve air quality and reduce CO2, we need government policy to encourage take up of the latest advanced low emission diesels as, for many drivers, they remain the right choice economically and environmentally.”

SUVs were the only vehicle segment to see registrations growth in January, with demand up 6.6% to account for a fifth (20.2%) of all new car registrations.

Demand in all other segments fell, with the biggest declines affecting the mini, MPV and executive segments.

Ford’s Fiesta was January’s biggest selling car, registering almost double the registrations as the second-placed Volkswagen Golf and the Ford Focus in third.

The SMMT said that its latest figures illustrated “the importance of diesel cars and engines to the UK economy”.

Last year, more than two-in-five of the cars leaving British production lines were diesels, it said, while manufacturers also produced more than 1 million engines – directly supporting some 3,350 jobs and, combined with the UK’s petrol engine output, delivering some £8.5 billion to the economy.

Last month Zeus Capital market analyst, Mike Allen, told AM that his “conservative” prediction for Q1 of 2018 would be an decline in new car registrations of no less than 10%.

Euler Hermes, the world’s leading trade credit insurer, today predicted that the shift away from diesel cars and issues surrounding Britain’s exit from the EU would contribute to a 6% decline in new car sales in the UK during 2018.

Maxime LeMerle, head of insolvency and sector research, said: “European car sales reached the highest level in a decade topping the 15 million mark in 2017. Almost every market supported the robust performance except the UK automotive industry, which also faces a difficult year ahead.

“Together with a slowdown in production, we expect to see a six per cent drop in new vehicle registrations in the UK in 2018, driven mainly by uncertainty about Brexit, diesel taxation, air quality plans and also waning consumer confidence and spending power.

Robinson added: “On the used vehicle side, franchised retailers continue to see a buoyant market, which is worth over £65 billion a year.”

Simon Benson, head of motoring services at AA Cars, described the SMMT’s January registration figures painted a fairly bleak picture as “the first real temperature test” of the health of the new car industry in 2018. He said: “With the market now in its 10th month of decline, motorists are clearly wary about purchasing a new vehicle.

“In fact, our own research suggests a lack of consumer confidence cost the industry an estimated £2.6 billion in 2017 alone.”

Green hit out at the London Mayor for "continually ignoring" what he called "the city’s biggest polluters", commercial vehicles, and for contributing to the worrying trend for the UK automotive industry.

He said: “Sadiq Kahn is one of the politicians contributing to what will be a painful few years for the UK’s automotive industry.

“Thoughtless policies, which include an unfair barrage of attacks on private vehicles, without providing infrastructure for consumers to practically consider electric vehicles as an alternative, has seen sales shrink across the majority of markets, with diesel once again hardest hit and jobs will suffer as a result.

“I’m absolutely all for cleaning up our streets, it has to be done, but Sadiq’s policies arrogantly ignore HGVs, vans and the real problems time and time again, despite research showing that across Europe, less than 5% of vehicles are commercial vehicles or heavy duty trucks, but they contribute to almost 20% of greenhouse gas emissions.”

“If the car industry is to recover by 2019, the Government needs to consider putting its full backing behind AFVs. It also needs to do more to educate consumers about their options.

"And if a meaningful switch away from fossil fuels is to occur, there needs to be financial incentives for consumers to switch to hybrid and electric vehicles now, not in 10 years.”

James Hind, founder and chief executive of carwow, highlighted a number of manufacturer offers as evidence that OEMs were “pulling out all the stops” in an attempt to generate sales in Q1.

He added: “However, it’s clear the industry continues to be hindered by lack of clarity on diesel and the delay in implementing the electric car charging infrastructure promised in The Budget.”