SMMT new car registration forecasts from two months ago missed the mark by 1% – or almost 27,000 vehicles – a ninth consecutive month of falling sales resulted in a 5.7% decline for the whole of 2017.

The industry body revised its predictions for the year, and reaching forwards as far as 2019, back in October but today’s published results revealed that a 14.4% slump in sales during December had left it off the mark.

SMMT chief executive Mike Hawes did not mention the disparity in his official comment on the 2017 full-year results as he blamed failing consumer confidence as a result of Brexit and confusion surrounding government policy on diesel vehicles for the faltering market.

He said: “2017 has undoubtedly been a very volatile year and the lacklustre economic growth means that we expect a further weakening in the market for 2018.”

NFDA director Sue Robinson chose to cite SMMT predictions from January 2017 - which were 0.7% off the eventual full-year 2017 figure - when she claimed that the full-year 2017 registrations total had been "in line with the forecasts".

She said: "The UK new car market closed 2017 in line with the forecasts at the start of the year, which predicted a decline in registrations following 2016’s record performance."

But the SMMT’s predictions of two months ago for both this year and 2018 could be revised after the disparity in Q4 2017.

Despite the market’s failing fortunes in 2017 it remained at third highest level in a decade. 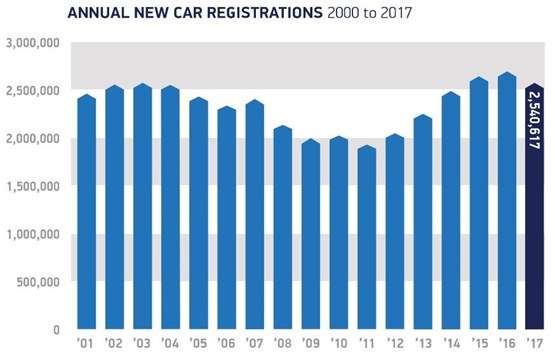 Falling demand for diesel vehicles was central to the poor performance of the market in December, according to the SMMT.

While appetite for electrified cars reached a record high with almost 120,000 alternatively-fuelled vehicles (AFVs) hitting UK roads – a 34.8% uplift – demand for diesel vehicles declined 31.1% in December and 17.1% during the whole of 2017.

The SMMT said that the result undermined “progress on emissions and CO2”, warning “consumers could end up paying more in fuel if they travel high mileages”.

Its latest calculations suggested that drivers of diesel-powered D-Segment family vehicles, SUVs and executive cars pocketed an average saving of between £300 and £400 a year on their fuel bills if they drove diesel. 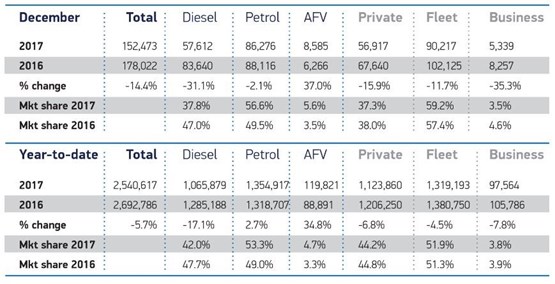 Private, fleet and business registrations were also all down in 2017, with demand from private motorists declining 6.8%, while fleets saw a fall of 4.5%.

The biggest percentage losses were seen in business registrations, with the sector ending the year down 7.8%, however.

Commenting on the results as a whole, Hawes said: “The decline in the new car market is concerning but it’s important to remember demand remains at historically high levels.

“More than 2.5 million people drove away in a new car last year, benefitting from the latest, safest, cleanest and most fuel efficient technology.

“Falling business and consumer confidence is undoubtedly taking a toll, however, and confusing anti-diesel messages have caused many to hesitate before buying a new low emission diesel car.

“Keeping older vehicles on the road will not only mean higher running costs but will hold back progress towards our environmental goals. Consumers should be encouraged to buy the right car for their lifestyle and driving needs irrespective of fuel type – whether that be petrol, electric, hybrid or diesel as it could save them money.”

Sue Robinson claimed that franchised retailers remained optimistic about their prospects for 2018, despite the nine consecutive months of car registrations decline experienced in 2017.

“Although 2018 will bring challenges, there will also be many opportunities for our sector which is resilient and capable of adapting to changes.

“The significant growth of the alternative fuel vehicles segment is particularly encouraging. However, as petrol and diesel still represent the vast majority of UK’s car parc, it is crucial that consumers and businesses continue to receive consistent support to ensure that this transition is as smooth as possible.”

James Dower, senior editor of Black Book at Cap HPI, said: “The decline in new car registrations in 2017 ended up within our expectations. The result should be balanced against a healthy year for used car sales that have seen sustained retail demand hold up values through the year.

“Certain media reports may reflect that 2017 has been a problematic year for new car sales but, in reality, we are more than likely to have witnessed a marketplace that is closer to true new car demand than seen in previous years. There is no doubt that pre-registration has formed a fundamental part of the overall volume this year.

“Looking into 2018 a further decline in new registrations is expected. But lower volumes with less forced activity from manufacturers could bolster profit margins on new sales. We also expect to see less pressure on nearly new values. Used car sales will continue to grow in importance, and we have already seen dealer groups move to enhance their used car offerings.

“Demand will continue to rise for hybrid, and pure electric vehicles and the strength we’ve seen in 2017 is indicative of a growing acceptance with consumers. Historically, December registrations tend to be relatively subdued as consumer demand is low and the slightly enhanced value of the New Year registration lead to greater activity in January.”

Chris Green, Chris Green, chief revenue officer at consumer car management expert Regit, said: “Not only are diesel sales down over 17% YOY, but to date there has been an extremely worrying 30% drop in Q4 alone. There are no new diesel models forecast to replace such a large volume of cars and with manufacturers stating they will not be in full EV production until 2021 at the very earliest, consumers don’t yet see practical replacements for their current model, so I fully expect this demonisation to impact the UK car market for the next three to four years.

“This sales hit has been the result of successive governments continuing to punish diesel drivers without offering any real incentives for them to upgrade and purchase a more environmentally friendly model. As a result, many consumers will now run their existing models to the ground and this worrying collapse of UK car sales will continue to impact the market until serious spending on EV infrastructure at a national level begins. And when you couple this with the uncertainty over both Brexit and a potential Corbyn government, the outlook for UK car sales moving into 2020 is beginning to look bleak.”

Nathan Coe, Auto Trader’s chief operating officer, said: “2017 marks the third best year in a decade for new car registrations and although this represents a 5.6% decline on last year, it is relatively positive considering a backdrop of lower exchange rates, consumer uncertainty around diesel and a renewed focus on profitability by certain manufacturers over market share.

“Tough conditions have been made all the more challenging by the negative tone of the fuel debate, as well as the lack of a clear Government strategy to encourage motorists to exchange older diesel cars to the latest diesel technology or alternatively fuelled vehicles.

“It’s clear that the Government’s demonization of diesel has adversely impacted the new car market as the decline in registrations shows; it’s also evident on Auto Trader as we have seen a 27% decline this year for consumers searching for diesel cars. In contrast we’ve seen an 84% increase in searches for electric vehicles.”