As a package of funding worth more than £260 million was launched by the Government to help improve air quality in some of the most polluted areas its seemed unlikely that retailers would be handed an sure-fire boost to sales with help from public funding.

The document said that analysis of previous schemes had shown poor value for the taxpayer and that they are open to a degree of fraud.

However, Derby City Council recently registered its interest in promoted a targeted scrappage scheme in a bid to deliver swift change to its roadside NOx levels and DEFRA did not wholly dismiss the prospect of a scrappage scheme if certain criteria were met.

The report said: “Proposals considered would need to demonstrate that they offer clear value for taxpayer’s money.

“Finally, given all measures will be funded by relevant taxes on new diesel cars alongside existing departmental budgets, proposals put forward would need to be fair to the taxpayers who would fund any measures.”

The UK Plan for Tackling Roadside Nitrogen Dioxide Concentrations was produced by the government in July last year, and outlined that councils with the worst levels of air pollution at busy road junctions and hotspots must take robust action in the shortest time possible.

A range of options local authorities could consider to utilise this money such as new park and ride services, freight consolidation centres, concessionary travel schemes and improvements to bus fleets have been set out by DEFRA.

At the same time, more than £40 million from the £255 million Implementation Fund has been awarded to support local authorities take action as soon as possible.

Among the measures are:

£11.7 million to the 28 local authorities with the biggest air quality challenges to help carry out the work needed to develop air quality plans, including securing resource and expertise

£2.4 million from the 2017/18 Air Quality Grant for local community projects to tackle air quality at a grass roots level.

£1.65 million to support the 33 local authorities that have been asked to conduct targeted feasibility studies to identify measures that could bring forward compliance dates within the shortest possible time

Environment Minister Thérèse Coffey said: “We have been clear that local leaders are best placed to develop innovative plans that rapidly meet the needs of their communities.

“Today’s funding demonstrates the government’s commitment to support the local momentum needed and continue to improve our air now and for future generations.

“Improving air quality is about more than just tackling emissions from transport, so later this year we will publish a comprehensive Clean Air Strategy.

“This will set out how we will address all forms of air pollution, delivering cleaner air for the whole country.”

As part of DEFRA’s report, published tables made clear the balance of NOx emissions created by vehicles in the UK.

Below is one graph detailed within the report which highlights the disparity between cars and commercial vehicles and vehicles which comply to Euro 6 emissions standards and the rest of the UK car parc. 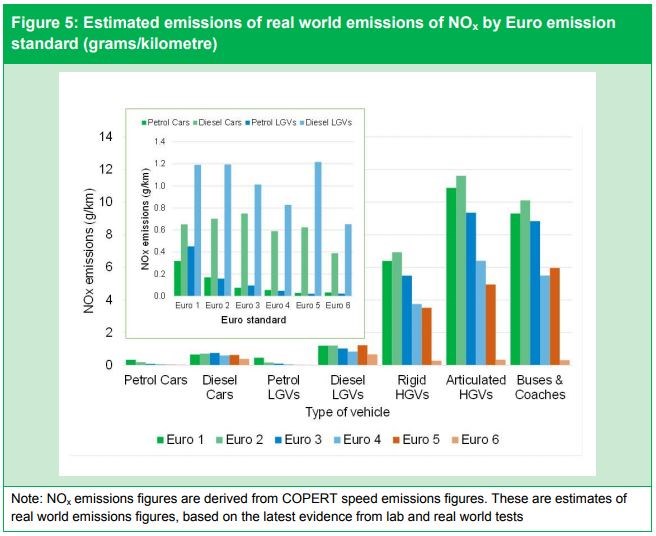