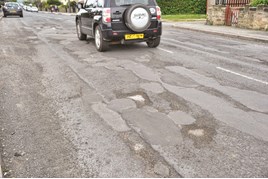 Transport Secretary Chris Grayling announced today (March 26) that the cash would be delivered top of the £75m in Government funding already given to councils from the Pothole Action Fund this year and a £46m boost for highways authorities announced before Christmas.

The announcement comes just a week after it emerged that local authorities were fighting a losing battle in their bid to battle Britain pot-hole-blighted tarmac.

Last week the Government’s Annual Local Authority Road Maintenance survey – based on information from 60% of local authorities responsible for roads in England and Wales – issued ‘red alerts’ to 24,400 miles of the UK’s road network.

This length of road network could ‘fail’, or become too dangerous to drive on, if not repaired over the next year, the report said.

Local authorities in England and Wales report that the gap between the funds they received and the amount they actually needed to keep the carriageway in reasonable order was almost £556 million – a shortfall of £3.3m for every authority. And, it would now take 14 years – up from 12 years in 2016/17 – to get local roads back into a reasonable steady state, provided adequate funds and resources were available.

In his announcement today, Grayling said: “We have seen an unusually prolonged spell of freezing weather which has caused damage to our local roads.

“We are giving councils even more funding to help repair their roads so all road users can enjoy their journeys without having to dodge potholes.”

Already, £2.5m has been allocated to Devon County Council to quickly repair the A379 which was badly damaged by Storm Emma, AM’s sister title, Fleet News, reported.

These trials will ultimately help provide councils with data to enable them to repair potholes before they occur as well as maintain their other assets more effectively as part of their asset management plans.

This will help prevent further potholes and other road defects occurring over time, said the Government.

Budget 2017: A summary of all the key points

Budget 2017: A summary of all the key points