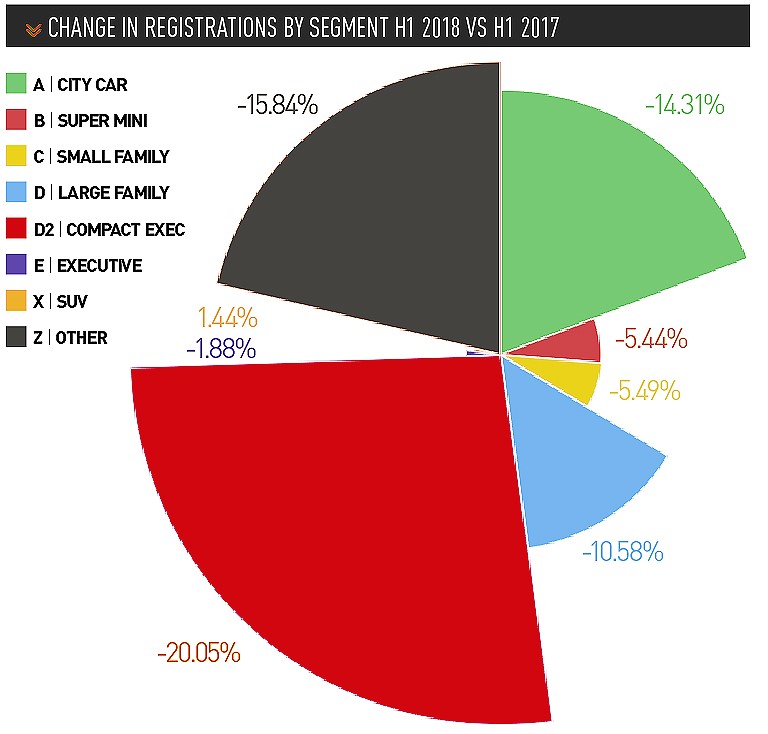 With half the year gone, the underlying trends of 2018 are emerging. The overall market, which was down by 6.3%, is in line with the forecast made by the SMMT at the start of the year of a 5.6% decline for 2018 as a whole. However, within the overall figures, there have been some radical changes.

At a manufacturer level, the two biggest winners among the major brands have been Volkswagen and Seat. VW has grown from 7.7% in H1 2017 to 8.6% in H1 2018, driven mostly by the Golf and its crossover cousin, the Tiguan. Seat has grown from 2.1% to 2.7% over the same period. A brand without much of an identity for many years, Seat is increasingly a maker of VW Group crossovers at lower cost than VW. That sounds derivative, but the public’s appetite for such crossovers seems almost limitless.

Nissan and Fiat are the biggest car sales losers

Among the major manufacturers, the biggest losses have come from Nissan and Fiat. Nissan registrations have fallen by 30%, and its market share is down to 4.5% year-on-year, from 6.0% in H1 2017. The major culprit is the ageing Juke, which has fallen by 44%. It is no longer the best-selling B-segment crossover – it is well behind the Vauxhall Mokka X, and it is level with the uninspiring Ford Ecosport in second place. The second-generation Juke was expected by the end of 2018. However, as Nissan is only awarding supplier contracts as you read this, that date is now impossibly ambitious – it seems the current model will have to soldier on well into 2019.

Meanwhile, “Fiat loses share” is hardly news these days. The bare facts are that Fiat registrations are down by 25.8%, to a market share of just 1.75%, so, arguably, Fiat is no longer a mainstream brand in the UK for the first time since imports really got going in the 1960s.

When Sergio Marchionne, the outgoing chief executive, gave his last press conference, city analysts queued up to praise him for what he had done to the share value of Fiat Chrysler Automobiles (FCA). However, that was due to the surge in profits from Jeep and Ram pick-ups in the US – Fiat is now little more than a niche supplier of stylish Italian city cars.

A couple of other car companies are worth singling out for attention. Jaguar registrations were down 11% in the first half of 2018, which is not terrible against the overall market – until you remember that it has a brand-new E-Pace, and all its other major models are between one and four years old (XE, XF, F-Pace). Crossover sales are doing well, but sales of saloons look terrible. The XE is down 64.1% YTD, and is being outsold by the Audi A5, let alone the Audi A4, while the XF is down 43.1% and is being outsold by the Volvo S90/V90. Ever since the 1950s, Jaguar’s backbone has been executive and luxury saloons, but do current sales justify designing another generation of Jaguar four-doors?

However, Jaguar looks a picture of health compared to Infiniti, with its UK-made C-segment Q30/QX30 proving a catastrophic failure. Year on year, H1 registrations were down 83.8% to just 277 units – in a segment that has registered 400,000 cars so far this year, that is as close to zero as makes no difference.

The biggest question in the market is about the future (or possible non-future) of diesel.

Overall, diesel registrations are down 30.2%, but of more significance is what is happening segment by segment. It is no surprise that sales of B-segment diesels are down by 50.1% in H1 2018, but it is more significant that the share of diesels in the compact executive class has fallen from more than two-thirds in the first six months of 2017 (67.7%) to less than half in H1 2018 (46.9%). This segment was once epitomised by the BMW 320d, but even BMW now has a 50:50 split between petrol and diesels. It used to be that any car smaller than a Focus was likely to be petrol, and anything larger was likely to be diesel. Today, all major segments are predominantly petrol except SUVs and large executive saloons (e.g. the Mercedes-Benz E-Class).

The two largest segments – B-segment superminis and C-segment small family cars – appear remarkably stable, with sales falls of 5.4% and 5.5% respectively. However, within each segment there have been big changes.

In the B-segment, crossovers such as the Vauxhall Mokka X are up 17.5% year-on-year and take 27.8% of the segment. In contrast, MPVs such as the Kia Venga are down 66.5% and take just 1.7% of the segment. Hyundai and Kia take 78.4% of all B-segment MPV sales, so presumably they will have the responsibility of switching off the lights when the door closes on this segment in the next few years.

In the C-segment, it is a similar story. Crossovers such as the Tiguan are up 56.3% and take 21.6% of the segment, but MPVs are down 28.9% and take just 6% of segment sales. With no C-segment MPV likely to reach even 10,000 sales for the whole of 2018, one has to wonder if the sub-segment will revert to where it came from – small vans with windows for those who need maximum space on a modest budget. It may not be economically viable to design a separate MPV body for such low volumes.

Looking more broadly, most car companies will not be too upset by the current market situation (unless they are behind in the race to introduce more crossovers), but they will be aware that they are storing up trouble for the future. If customers are buying heavier crossovers instead of hatchbacks, and then fitting them with thirstier petrol engines, the car companies’ carefully constructed plans to get down to an average of 95g/km of CO2 by 2021 are in serious danger. In 2017, average new car CO2 emissions actually rose slightly to 121 g/km, and 2018 buying patterns are not helping the situation. DAVID FRANCIS