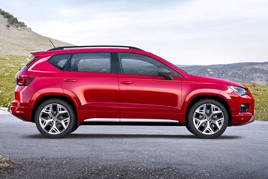 New car registrations have had a tough 2018, with only 12 manufacturers posting growth year-to-date and only half of those posting substantial growth in double digits.

One of the biggest growth brands of the year has been Seat, with more than 60,000 registrations as of November and a 15% boost year-on-year.

Part of that is down to a favourable product cycle, with launch models in the Ateca and Arona crossover SUVs providing a boost, particularly as they are both in segments that are still growing.

Seat’s performance is also particularly impressive considering the Volkswagen Group brands’ reported challenges with getting WLTP-homologated product through to dealerships.

The last quarter of the year saw Seat push even harder than Q3 on its representative examples, with a 0% offensive to close out the year. Just the Arona and Ateca were supported with 0% deals in Q3, but the last three months of the year have seen every model, apart from the Leon ST, offered with a zero-interest deal.

The Mii, Ibiza, Arona and Ateca are all available on PCP for under £200 a month and the Leon range isn’t far behind, making every car pretty affordable for the average family.

Škoda had long been Volkswagen Group’s affordable workhorse option, but as that brand has pivoted towards more of a premium offering, Seat is now catching up in pure volume terms.

Seat’s dealer network rated the brand 7.5 out of 10 on how competitive its finance offers are, according to the most recent NFDA Dealer Attitude Survey. The average score was 6.6.

Volvo is the stand-out premium player this year, with 8.2% growth up to November. While it is still a very long way from the kind of numbers its German rivals put out, it is really the only credible challenger brand in that marketplace right now. Jaguar sits just below Volvo in the year-to-date growth chart but there’s more than 10,000 units between them.

Volvo’s Q4 campaign is varied, with an affordable offer on the V40 entry level model – 0% at £189 a month over four years. The new XC40 is under £300 a month, but it has the highest APR rate out of Volvo’s model range, hinting at the confidence the brand has in the car to not have to support it financially as much as other vehicles.

That leaves the XC60 and XC90 to cater for the more expensive end of the market, with higher percentage APRs and chunkier monthly payments for those customers with more disposable income.

Volvo’s network rated it at the average of 6.6 on the competitiveness of its finance deals, so there is some room for improvement against Mercedes, Audi and BMW next year, as they scored 8.4, 7.5 and 7.2 respectively.

Kia is the volume king so far in 2018, with nearly 92,000 registrations. Growth hasn’t been massive, up almost 3% this year, but the South Korean brand has accelerated away from Hyundai and almost caught up with Toyota.

Of the top performers picked out by AM, Kia is the only brand that is forgoing 0% offers in Q4 this year. Ceed and Sportage get 2.9% APR offers, but the rest of the range is pushing 6%. Those higher interest rates will be pulling in more profits for all concerned and that’s reflected in how the network feel about Kia’s finance strategy.

Kia was rated 8.3 out of 10 by its dealer network for how competitive its finance offers are in the market, the second-best rating of all manufacturers (Toyota was the highest rated at 8.7).