The UK market suffered Europe’s largest decline in registrations during a year in which the region delivered its highest new car registrations total since 2007.

Just 346 more vehicles were sold in 2018 compared to the prior year’s total to deliver a total of 15.6 million new car sales, but the UK’s 6.8% decline tied with Sweden as the bottom ranked nation for registrations, Jato Dynamic’s full-year report found.

Demand for diesel vehicles also waned, the fuel type registering an 18% decline in registrations to reach its lowest market share since 2001.

Diesel vehicles counted for just 36% of all registrations, as their market share dropped 8ppts on 2017 and 19ppts on 2011.

Felipe Munoz, Jato’s global analyst, said: “The effects of WLTP and the lack of availability of many key versions affected registrations in Q4, which is not surprising given that by late November less than two in three versions available in Europe were homologated.” 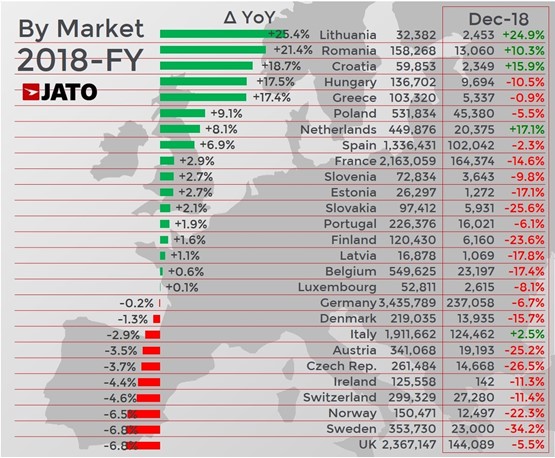 Demand for diesel vehicles fell by double digits in 20 of the 27 markets included in Jato’s analysis, with the largest drop being the UK’s 30% decline.

“Throughout 2018 we continued to see the effects of the diesel crisis, as announcements of policy changes by governments led to confusion and panic among consumers,” said Munoz.

Petrol-powered vehicles made up the bulk of vehicles registered in 2018, with the fuel type making up 57% of all registrations.

Jato reported that there had been almost 200,000 more AFV registrations than in 2017.

A total of recording 944,800 registrations and a 6.1% market share marked the best ever performance for AFVs in the region.

Norway was the biggest market for electric vehicles, where they held a 31% market share, while the Netherlands outsold the UK and became the fourth largest EV market, behind Germany and France.

Despite growing at a slower rate than in previous years, the shift from traditional cars to SUVs continued in 2018, Jato said.

Munoz said: “Unlike other market trends that can often be short-lived, the SUV boom is stable and longlasting.

“The success is down to the industry listening to consumers and giving them what they want in terms of design, subsegments and categories.”

Midsize cars were also affected by the demand for SUVs, as both premium and mainstream types recorded double-digit falls.

There was little change at the top of the car maker leader board, as the Volkswagen Group maintained its position at the top, recording 3.72 million registrations and a stable market share at 23.8%, while PSA and Renault-Nissan once again came in second and third, respectively.

BMW Group climbed the rankings to become Europe’s fourth largest car maker, while Hyundai-Kia was the biggest market share winner, with its volume up by 5.2% to 1.03 million registrations, as it outsold other big makers like Ford (-3.3%), FCA (-2.4%) and Daimler (-2.8%). 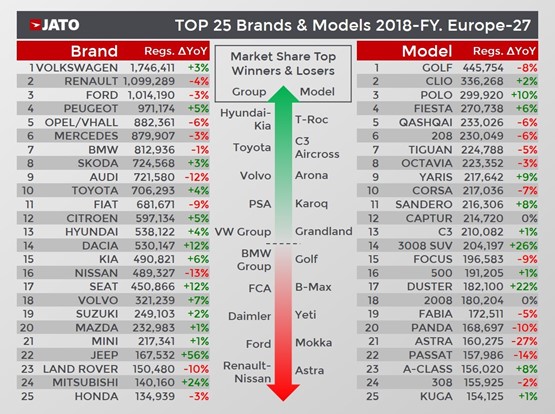 Among the brands, Jeep posted the highest market share gain and – for the first time in its European history – recorded a market share above 1%.

The Volkswagen Golf was once again the best-selling car in Europe, however it did post an 8% fall in its registrations, mostly due to a big drop in its diesel sales, which were down by 30

Opel/Vauxhall’s Astra left the top 10, however, as its registrations fell by 18% following large drops in its two main markets – the UK and Germany.

Meanwhile, the Volkswagen Polo was the only model in the top 10 to record double-digit growth, while the Nissan Qashqai kept its place as the best-selling SUV in Europe, despite the strong growth posted by the Peugeot 3008, which came fourth.