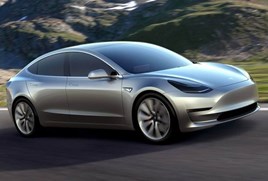 Electric vehicle (EV) sales rose by 85% across Europe as the region suffered its seventh consecutive month of declining car sales.

Tesla moved into Europe’s top 25 biggest selling OEM brands as the number of EV sold in the 27 countries analysed by Jato Dynamics on a monthly basis rose over the 100,000 (125,400) mark for the first time ever – with its Model 3 saloon the top market share winner.

But the positive news for the Californian alternative fuel vehicle (AFV) maker came as the wider market suffered a further 3.6% decline in registrations as total Q1 registrations dipped 3.2% to 4.13 million units.

Jato said in its monthly report on the European new car market that ongoing political and economic uncertainty, including lack of clarity around Brexit, alongside consumer preoccupation with diesel bans in cities, had been to blame for the decline in demand.

In total, 19 of the 27 markets included in this release posted new car registration declines during March – including the top 10 largest markets in Europe.

Felipe Munoz, Jato’s global analyst, said: “It was always going to be a challenge to maintain the growth rate we’ve seen in recent years thanks to recent events such as WLTP and legislation around diesel, as well as the impending CO2 targets.

“Despite the negative trend we’ve been seeing since September last year, the market is still strong in terms of volume and offer. In fact, a slow-down after many years of growth is not bad at all.”

Jato attributed last month’s rapid volume growth of EVs to the influx of Tesla Model 3 ‘s into Europe during the period.

The brand entered the top 25 best-selling brands in Europe during March as registrations of the Model 3 jumped from 3,747 units in February (revised) to 15,755 units in March – meaning it was Europe’s top selling electric car.

At the same time, diesel cars continued to lose ground.

Jato said that, despite the big drops posted last year, it seems that concern among consumers is still affecting demand, adding that the trend has "not hit rock bottom yet".

However, Jato said that the segments’ sales performance is not as strong as it has been in the past, with volume growing by “only” 5%.

Volume was up 11.7% for small SUVs, and 5.3% for compact SUVs. The rest of the SUV market posted declines.

The Volkswagen Golf continued to lead the European ranking by models, despite a 14% decline in sales during March.

The best performer of the top 10 was the Opel/Vauxhall Corsa, which posted strong growth in the UK, Germany and France – selling in similar numbers to the far newer Volkswagen Polo. 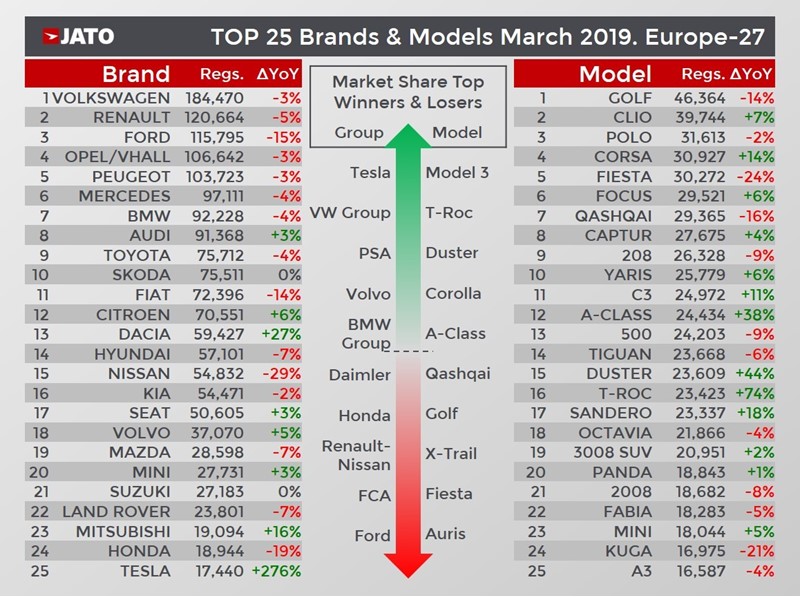