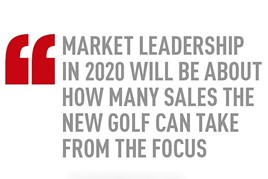 The new car market fell 4.6% in Q2, which, given that it followed the UK’s chaotic non-exit from the EU on March 31, was not a bad result.

Looking at the manufacturers, market-leading Ford fell by 5.6%. One may think a fall only slightly worse than the overall market was not terrible, but it hides a strategic problem.

The Focus is now fully available, so its registrations are rising. But Ford has made a bit of a mess of its small car strategy. The current (and very good) Fiesta was deliberately taken up-market, while entry-level small car sales were meant to be taken by the Ka Plus. That ball has been well and truly dropped – Fiesta sales are down 16%, to just under 20,000 units, in Q2, while Ka Plus sales were stagnant at just more than 2,300. With the Ka Plus not expected to survive long-term, Ford may have to re-introduce the sub-Zetec versions it dropped so publicly.

Behind Ford, Volkswagen actually fell by more, with registrations down 8.2%. The main culprit was the Golf, which was down 24.8%. However, the Golf is now on run-out, as the Mk 8 is due early next year. Market leadership in 2020 will be about how many registrations the new Golf can take from the Focus, and how many the Ford Puma B-segment crossover can add to Ford’s total. It will need to be a success to keep VW at bay for another year.

In third place is an unfamiliar name: BMW. It had a good quarter in the UK, with a market share of 7.6%. BMW will be wishing that success was replicated in other markets, as it goes through an unusual period of turmoil. It has, in effect, sacked its chief executive, Harald Krüger, by not renewing his contract for an expected second term – a rare move by the usually steady German company. Profit margins have halved since 2011, and the share price has fallen by almost half on Krüger’s watch.

Just behind is Mercedes-Benz, which has been almost neck-and-neck with BMW for the past couple of years.

The big news is the company whose name we have not mentioned: Vauxhall. In Q2, it was in fifth place, fewer than 400 units ahead of Audi. Given that Audi is still recovering from a shortage of WLTP-homologated cars at the start of the year, Vauxhall will have a fight on its hands to stay ahead in Q3. Its fortunes rest on the next Corsa – one might say it cannot come too soon, but it would be more accurate to say that it might just avoid coming too late. The current Corsa can trace its roots to the 2005 Fiat/GM small car platform that also supported the late, unlamented Fiat Grande Punto. Fourteen years for a platform that was only moderately competitive at launch is an absurd length of time – in car years, the Corsa is a good 100 years old.

Behind Audi in sixth place, there is a very big gap to seventh-placed Toyota. Toyota sales were up 6.7% in the quarter, thanks to the recent C-HR and new Corolla. Those two models have enabled Toyota to stay ahead of Nissan, but Nissan will be hoping the next Qashqai and Juke can put them back to their position as leading Asian brand.

However, Nissan has a more immediate problem – Kia was just behind it in Q2 (fewer than 100 units separated the two companies). Given the fact that Kia sales are rising (up 2.3%), while Nissan’s are falling (down 5.8%), Kia will be hoping to overtake Nissan in the second half of the year. That would be an important psychological milestone for the ambitious South Korean brand – beating Nissan in its “home” European market would be a big achievement.

Most brands immediately behind Kia broadly tracked the market, with a few exceptions.

Volvo had a great quarter, up 15.4%. There must be a few older Volvo employees wearing a wry smile that it outsold Renault in Q2. In the early 1990s, Renault tried to buy Volvo – no one then would have imagined Volvo would ever outsell Renault in the UK.

Another traditionally larger brand that Volvo managed to outsell was Honda. With a lacklustre range (the Civic Type-R excepted) and terrible publicity from the announcement of the Swindon factory closure, it is no surprise that Honda is suffering. The company will hope that its retro-cute electric small car, the Honda E, due in 2020, can lead a fightback. Honda says 9,000 UK drivers have already registered interest.

Fiat also had a bad quarter, with sales down by 24.9%, but that is about as surprising as saying that stones sink. Dacia (up 18.8%) will be pleased to have overtaken the Italian brand, as Fiat was traditionally the king of low-cost European cars. Dacia is now very much a mainstream brand, with the new Duster at the forefront of the brand’s rise. An affordable crossover with just the right degree of SUV-inspired ruggedness is catnip to buyers on a budget.

Finally, a small nod of recognition to MG, with its sales increase of 30.2%. With a market share of 0.6%, MG is becoming a worthwhile niche player in the UK car market. Given the total failure of other Chinese car brands that have come to Europe, that is a notable achievement. David Francis