Car dealers may experience a used car sales performance blip after voters head to the polls for today’s General Election 2019 but the sector is “performing pretty well” in challenging times, according to Cazana.

In the latest of his monthly Used Car Market Updates the car pricing data specialist’s director of insight, Rupert Pontin, has said that, despite low consumer confidence levels in the retail sector, the automotive industry had proved resilient in recent months.

Pontin believes the return of large volumes of ex-PCP vehicles into the market will not trigger value drops in the coming months and urges retailers to analyse market data to get their stocking decisions right in the weeks and months to come.

Read on for his full market overview:

The more positive view at the moment is that the used car market has yet to suffer any significant further decline in demand from the consumer. The new car market may have dipped by 1.3% in November but activity in the used car market has remained good. Where many had felt that consumer confidence was still on the decline, the chart below suggests that whilst low, confidence seems unlikely to fall further until the result of the election is known and the dust has had time to settle:-

The chart below shows the current state of Retail Consumer Confidence in the UK.

The new car market year to date is now running 2.7% behind 2018 which is the prediction that Cazana gave over a year ago and was some 3ppts more positive than other industry pundits at the time who later had to revise expectations.

Interestingly the new private car market is 3.4% lower than in 2018 but there is still time for this to improve through December, although there is some evidence that the new private buyer is still being tempted by fabulous late plate deals on pre-registered cars.

In recent months this market had been adversely affected by the plethora of petrol cars that had been forced to the market, however this seems to have now balanced as the non-RDE compliant cars have found homes via the used market at discounted prices so the balance of supply and demand is more consistent.

Looking specifically at the used car market overall and the chart below shows the performance of retail pricing as a percentage of original cost in the market at key age and mileage profiles against the same period over the last three years: 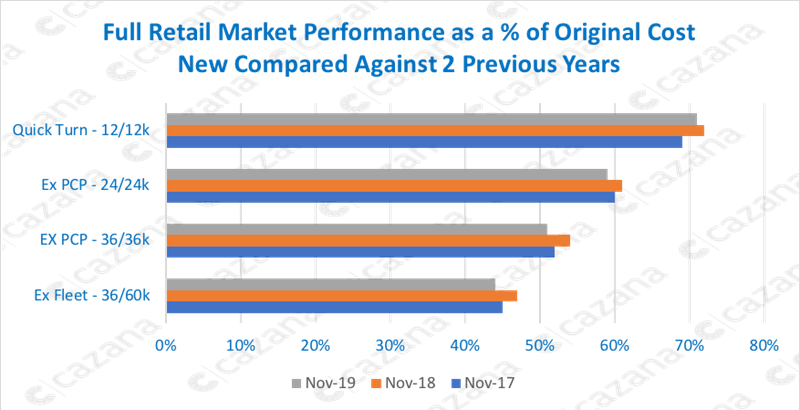 This highlights that November 2019 is at a lower point than it has been in the last three years and reinforces the effect of strong new car sales in recent years.

Whilst a little strength has returned to the late plate market the chart clearly defines the impact of ex-PCP cars coming back to the market in greater volume.

At two years old the decline is 2ppts and at three years this extends to 3ppts. This is beginning to become a bit of a pattern and as such needs to be watched more closely as the market may be sliding into a heavier depreciation pattern than has been experienced for some years.

In some respects, there is a view, and evidence to support the idea, that pricing has dropped because of the volume of cars in the sub twelve-month-old sector.

The need to get this short-term oversupply resulted in some very advantageous finance deals on that age car in the market, which ultimately meant that the cost-saving in buying a two or three-year-old ex PCP car was not big enough to attract the consumer.

The chart below looks a little closer at what has been happening at the two year age profile and measures the Retail price as a % of original cost new at two years and 24,000 miles by fuel type: 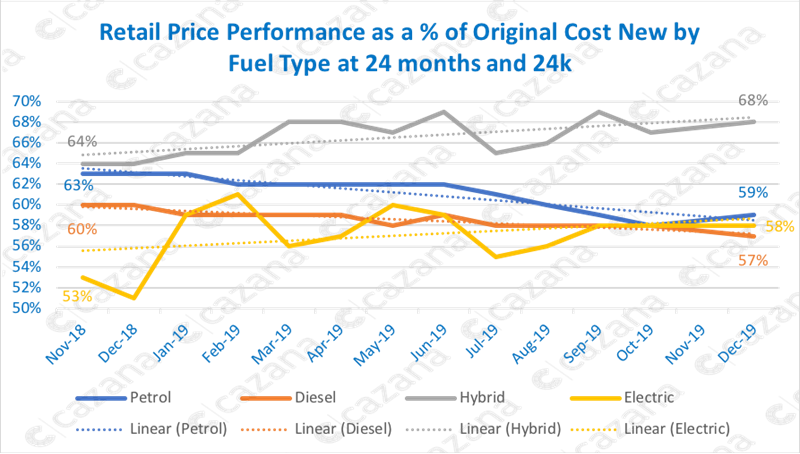 Whilst this age and mileage profile has seen only a 2ppt decline in pricing terms it is interesting to note that the volume of advertised cars has remained largely similar to November 2018 although the average cost new has increased.

This would suggest that higher value cars are coming to the market and that consumer appetite is for cheaper models.

Deeper analysis will reveal what specific vehicles are hitting the market but this chart reflects a larger price drop for petrol models at 4ppts in comparison with the same period last year.

This is followed by diesel models with a 3ppt drop.

Of note is that both hybrid and electric vehicles (EV) have seen a marked increase in demand.

This is in-line with market expectations and although the BEV (Battery Electric Vehicle) data looks spiky, this reflects the supply of vehicles to the market.

A retail price increase of 5ppts is 1ppt higher than that of hybrid cars and hybrid vehicles at this age are still leading the fuel types in overall residual value terms for the time being.

However, it would be wise to remember that as volume increases this residual value premium over other fuel types will diminish.

In summary, the used car market during November was actually better than many had anticipated, and although retail pricing dropped it is important to remember that these drops were not large.

Retail consumer demand has remained stronger than expected given the political and seasonal backdrop, and this is interesting and the same time reinforces the view that despite low consumer confidence levels as a whole in the retail sector, the automotive industry has performed pretty well.

Pressure points are specifically with the pricing performance of ex-PCP cars returning to the market, but there is no imminent expectation of large drops in value as some pundits had suggested a few weeks ago.

Recent industry events such as the very well-attended VRA Seminar paint a realistically positive image of the coming weeks and months with the slight caveat that the general election may cause a brief performance blip.