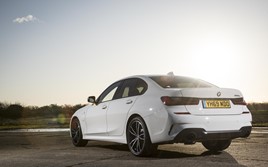 UK sales of new hybrid cars climbed by 20.6% in January as demand for diesel fell for the 34th month.

The data was published a day after the UK Government announced plans to ban sales of new cars with internal combustion engines, including hybrids, from 2035, which led the SMMT to criticise its lack of clear short-term policies to encourage electric vehicle uptake.

The plug-in car grant, which subsidises battery electric cars, is due to end this spring.

In today's January market update, Mike Hawes, SMMT chief executive, said, “The new car market is a key driver of the UK’s overall economy, so another month of decline is unsettling. Consumer confidence is not returning to the market and will not be helped by government’s decision to add further confusion and instability by moving the goalposts on the end of sale of internal combustion engine cars.

"While ambition is understandable, as we must address climate change and air quality concerns, blanket bans do not help short-term consumer confidence. 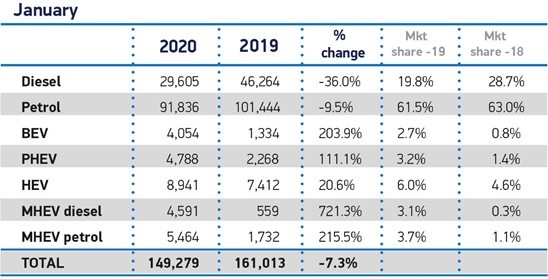 "To be successful, government must lead the transition with an extensive and appropriately funded package of fiscal incentives, policies and investment to drive demand.

"We want to deliver air quality and environmental improvements now but need a strong market to do so.”

The January figures were viewed with some concern by industry observers and analysts.

At Auto Trader, commercial director Ian Plummer said the EV growth was "reassuring" but it needs to continue "at pace" in light of the Government's new target.

He said Auto Trader's data shows huge rises in searches for EVs after the target was announced, but the pressure is on to ensure enough supply and to make pricing affordable.

"Government grants and incentives remain crucial if we are to see EV sales increase at any kind of meaningful rate,” Plummer added.

That was echoed by Sue Robinson, director of the National Franchised Dealers Association, who said: "The Government’s clean air policies must be consistent, and motorists need to receive further support, especially if the UK is to meet the 2035 deadline for the sales of new petrol, diesel and hybrids. This includes maintaining the plug-in car grant."

Robinson said the January new car market was "disappointing" but followed a strong December when consumers could benefit from a wide range of manufacturer offers.

“When planning future policies, it is crucial that the Government recognises the investments that will be required by franchised retailers and those that have already been made to meet the fast-changing consumer demand.

"Additionally, we urge the Government to reconsider its plans to ban the sales of new plug-in hybrids by 2035 considering the growth that this segment is experiencing.

“We will continue to work closely with our franchised dealer members and industry partners to inform consumers and help them select their ideal car while supporting the transition to EVs”.