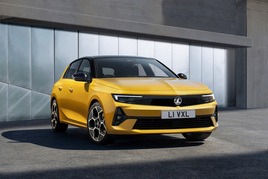 New car prices have risen by more than a quarter, in some cases, in the last three years.

The new Vauxhall Astra (pictured), for example, is now 26% more expensive than it was three years ago, with an OTR price of £23,805.

The research highlights the rising cost of living in the UK with motorists already reeling from record-high fuel prices that are forcing drivers to pay more than £1.50 for a litre of fuel.

Honest John says these higher list prices are likely to come as a shock to buyers who may not have changed their car in several years. And with a global computer chip shortage causing short supply and long waiting lists, buyers will find it fiendishly difficult to negotiate much of a discount.

“This research will come as a shock for many car buyers,” said HonestJohn.co.uk’s senior editor Dan Powell.

“Consumers are accustomed to seeing prices creep up as manufacturers launch new models or update a vehicle’s specification, but some of these price jumps are eye-watering and some drivers will question why they are being asked to pay for new models that feature pricey tech they have neither asked for or need.”

The three-door Ford Fiesta 1.0 EcoBoost in the popular ST Line trim and the Fiat 500 are both now 19% more expensive than they were three years ago, while the VW Golf is 10% dearer.

Honest John is advising car buyers to seek out pre-registered cars to get the best deals.

Record UK inflation was accompanied by a further 29% year-on-year rise in used car values during January, according to data published by Auto Trader.