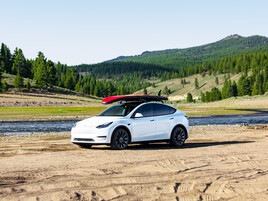 Tesla’s European sales growth and the launch of zero-emissions SUVs drove a 16% reduction in CO2 emissions among new cars sold across Europe in 2021, Jato Dynamics has revealed.

The volume-weighted average emissions of new cars sold across 17 European markets declined from 117.7g/km to 99g/km year-on-year as the Californian EV brand made a concerted push into the European market and OEMs increased the application of electrification across the burgeoning SUV sector.

Jato’s research acknowledged that the shortage of semiconductor microchips and other components had seen carmakers prioritise the manufacturing of EVs – further driving growth in the period.

In its newly-published report ‘Driving the Change for Good: The EV Boom’, Jato said: “Last year, many OEMs were forced to adapt their sales strategies, pivoting away from traditional segments to focus on the production of EVs and SUVs – the two most profitable segments across Europe.

“While the appetite of European consumers for EVs has been gathering momentum, the lack of electrified SUV alternatives has, until now, been a limiting factor within the market. In 2021 however, the efforts of OEMs to meet consumer demand began to be realised.

“The enhanced offering of new and improved electrified SUV models has further fuelled demand while also having a positive impact in reducing average CO2 emissions with midsize SUVs emerging as some of greenest vehicles in Europe.

“The reduction of emissions has not however been constrained to the SUV segment. The continued success of Tesla’s Model 3 - Europe’s most registered midsize vehicle in 2021- has meant that the average emissions of D segment vehicles dropped to the same level as city cars.”

The UK delivered a decline of 15%, placing it tenth on the ranking of overall year-on-year reductions at 106.2g/km, according to Jato.

Last week AM reported on new cars registrations data from the Society of Motor Manufacturers and Traders (SMMT) which showed that Tesla’s Model Y and Model 3 had been the UK’s best-selling cars during March. 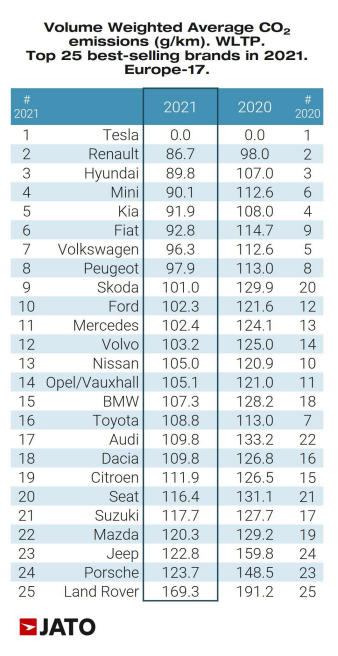 The brand, which has seen a rise in registrations across Europe, topped Jato’s list of least emitting car brands, due to its all-electric range.

But it was the rise of electrified SUVs that made the biggest impact on the emissions reduction of Europe’s new vehicle car parc in 2021.

Jato said: “On the one hand, SUVs are usually bigger and heavier than hatchbacks, sedans, and wagons, leading to a higher level of emissions output. In fact, the volume weighted average emissions for SUVs was 13% higher than for traditional vehicles.

“On the other hand, SUVs have seen more progress in reducing CO2 emissions than any other segment. The market’s acceleration towards electrification has been largely possible because of the arrival of more electric and plug-in hybrid SUVs. Last year, 35 of the 85 fully electric models available in Europe were SUVs.