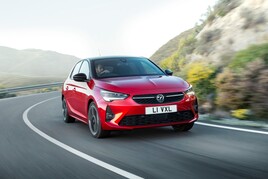 Vauxhall has removed its diesel-powered Corsa hatchback from sale in the UK after it was outsold ten-fold by the fully-electric Corsa-e.

The Griffin-badged Stellantis brand first introduced diesel power for its B-segment hatchbacks in 1987 but will now offer customers a choice of 1.2-litre petrol or pure electric, with a range of 222 miles, in the Corsa-e.

In a statement issued to Autocar this week, a spokesperson foe Vauxhall said: “Vauxhall has committed to going fully electric from 2028 and in line with that commitment will review its ICE powertrain offering from time to time.

“In line with UK customer demand, Vauxhall decided to remove the diesel powertrain from Corsa, leaving the all-electric Corsa-e and petrol-powered Corsa, as part of our model year changes announced on 6 April 2022.”

Autocar reported that Vauxhall had initially removed the diesel option for the previous Corsa around a year before production ended.

It reintroduced a diesel when the current generation model was launched in 2019, but it accounted for just 1.4% of UK sales - a tenth of Corsa-e sales.

Back in December Vauxhall cut £3,000 from the price of its Corsa-e and Mokka-e electric vehicles to maintain their affordability following changes to Government’s plug-in car grant (PiCG).

Vauxhall’s SUV range of Mokka, Crossland and Grandland models all offer a diesel drivetrain option, along with the Insignia and new Astra.