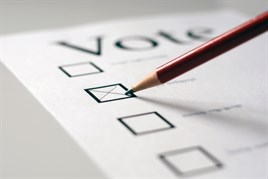 The conservative party has been revealed as the one to best represent the interests of the road haulage and logistics industry in a recent poll, conducted by the Road Haulage Association (RHA).

244 industry professionals were asked which party would do the best job of representing the industry, with 57.7% for the conservatives. Labour was the choice of 8.2% of those asked, while the SNP and Green Party shared 2% between them. 0.8% of those questioned answered, ‘Liberal Democrats’.

13% of those polled thought none of the principle parties had the industry’s interests at heart, while 13% said they didn’t know. 5% refused to comment.

Keeping the cost of fuel down is one of main concerns for hauliers and several of the visitors leaving the show commented they feared that a Labour controlled government would increase fuel duty at the earliest opportunity to help fund its manifesto pledges.

RHA chief executive Richard Burnett said: “These results are no revelation. Under the last government our industry and the UK’s consumers benefitted from a sustained fuel duty freeze. This has helped to keep distribution costs down, helped the cash flow of haulage firms, has put pounds in the public’s pockets and has directly contributed to the economic recovery. Other political parties have a track record on fuel duty, treating it as a cash cow.

“As we have highlighted in our manifesto, an investment in roads is vitally important to us and the economy as a whole. The promised £100billion of infrastructure spending, pledged by the Tories in their manifesto, is good news, providing a sizeable chunk is spent on the roads, reducing the £14billion per year, that congestion costs the UK economy.

“The political parties need to make clear where they stand on the issues of fuel duty and road investment. These are two hugely important issues, both politically and for the economy.”