Which? is calling for more realistic car fuel economy testing after finding 98% of the cars it tested couldn’t match or beat their miles per gallon (mpg) claims.

Which? tested 200 new cars across 2013 and 2014, and found that all but three of them fell short of their official mpg figures by 13% on average, resulting in drivers spending £133 more a year on fuel.

The Mitsubishi Outlander PHEV (a plug-in hybrid) performed worst, overstating its mpg by 120%, costing £459 a year in unexpected fuel costs.

But, the car that hit its owners’ pockets the hardest was the Jeep Grand Cherokee – based on Which? tests, drivers could end up spending £854 a year more on fuel.

The official test used by carmakers is outdated and contains a number of loopholes that lead to unrealistic figures. Manufacturers are allowed to reduce results by 4% at the end of the test, can opt to only test in a car’s ‘eco’ mode, turn off lights and air-con, and increase tyre pressures above the recommended levels to reduce rolling resistance. It also doesn’t accurately reflect real-life scenarios, such as motorway driving.

An improved test is due to be introduced from 2017, but the European Commission (EC) is facing pressure from the car industry to delay this change until 2020. Which? is urging the EC to stand firm and implement the new test in 2017 as planned.

Which? executive director Richard Lloyd said: “The cost of fuel is one of the biggest concerns for consumers which is why fuel efficiency has become an important selling point for new cars. The new test should be brought in without delay so consumers are no longer misled by fantasy mpg figures.”

Here are the top 17 cars that performed worst in the test: 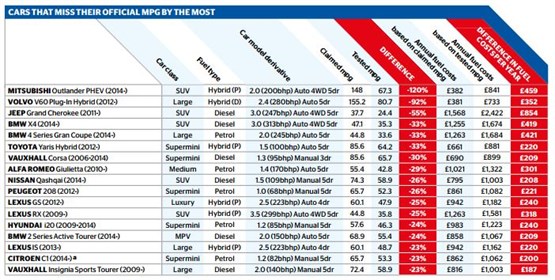