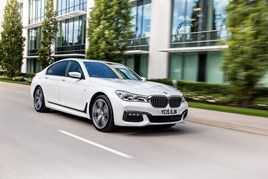 BMW has revealed details of its sixth-generation 7 series which goes on sale in the UK on October 24 priced from £64,530.

BMW is expecting to sell 1,400 7 Series models in its first full year of sales.

BMW's flagship is offered in two body variants, standard and extended wheelbase. The wheelbase of the extended version is 14cm longer, at 3,210mm and offers extra rear space as a result.

The engine line-up has been on a diet with all 130kg lighter than their predecessors.

The 3.0-litre petrol produces an output of 326hp, 7hp more than the engine it replaces.

The diesel unit powering the BMW 730d and BMW 730Ld models has a 3.0-litre capacity and likewise boasts a 7hp increase in output, in this case to 265hp. The new diesel models in the BMW 7 Series line-up are available with xDrive as an option with the exception of 730Ld.

There are also two new plug-in hybrid models: the BMW 740e, and the BMW 740Le xDrive. Both come with a 2.0-litre petrol mated to an electric unit for a total power output of 326hp. CO2 emissions are 49g/km and the official fuel efficiency figures are 134.5mpg. The 740e has an electric range of up to 25 miles and this is reduced on the four-wheel drive version to 23 miles.

The plug-in models come with an eight-speed Steptronic transmission as standard. The same transmission is available across the range as an option (standard on M Sport models).

BMW's iDrive system’s operating concept has been expanded to include a touchscreen method familiar from consumer electronics devices. A 12.3-inch display screen comes as standard. There are also touch sensitive elements to control other areas of the car's air-conditioning system.

BMW will be launching Executive Lounge Seating in July 2016 which includes the ability to move the backrest to be reclined to an angle of up to 42.5 degrees. To offer the passenger in the rear even greater legroom, the front passenger seat can be slid forward by an extra 90mm and its backrest tilted all the way forward.

For a completely unobstructed view to the front, the head restraint can be folded down as well. An electrically operated fold-out footrest extends from the front passenger seat. The seating package also includes a removable tablet which can be used from any seat and even outside the vehicle.

Standard tech features include navigation, a new-generation head-up display and autonomous parking which can manoeuvre into and out of forward parking or garage spaces without the driver even having to be sitting inside the vehicle.

The process is activated by the driver from outside the vehicle using the new standard BMW Display Key and then performed semi-autonomously by the vehicle. This feature is available from November 2015 onwards.

An optional Driving Assistant safety package has also been extended to include rear collision prevention and rear crossing traffic warning.

Active cruise control with Stop & Go function has also been extended: when this system is active, drivers can press a button to acknowledge speed restrictions detected by speed limit Info. The speed setting is then adapted to comply with the detected speed limit.