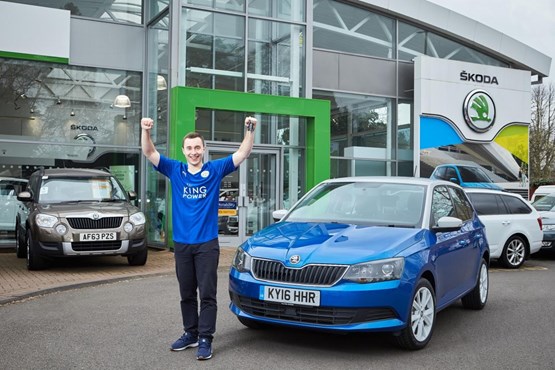 Leicester City’s march towards the Premier League title is leaving car buyers in the city feeling blue, with the sale of blue cars soaring by 340% year-on-year.

Research carried out by Škoda to coincide with its launch of new Fabia and Citigo Colour Editions, revealed that a national trend for adopting the colour of a local football team is being felt most at the home of the Foxes.

This coincides with an upturn in Leicester City’s fortunes, which sees them five points clear at the top of the league just a year after battling to avoid relegation.

Mick Brown, senior manager at the Sandicliffe Škoda retailer in Leicester, said: “This is a hugely proud and passionate city, and one that has been waiting a long time for its football team to climb to the top of the league.

“Now that’s a reality, we are seeing a blue revolution, not just on the pitch but off it, too. Blue is, by far, the most popular colour we’re taking orders for.”

Škoda’s research revealed that the effect of a football team’s home shirt colour on car sales can be seen across the country.

In Manchester, where United and City dominate the football landscape, sales of red Fabias (13% of all those sold in Manchester) and blue Fabias (27%) comfortably surpass Škoda’s national averages of 9% and 20%, respectively.

Sales of white cars are at 18% in Newcastle, meanwhile, ahead of the average of 15%.

The results of the research – which drew information from 1,000 football-loving motorists – showed that colour loyalty affects all kinds of purchases, with younger drivers in particular remaining true to their football team’s home kit.

More than a third (35%) of motorists under the age of 25 said they were much more likely to choose clothes in the same colour, while over a fifth (21%) prefer cars in the same shade.

Škoda’s Colour Edition trim is available on Citigo and Fabia models, priced from £9,990 and £13,360, respectively.

Based on the mid-range Fabia SE it adds a choice of six different colour combinations for the roof, alloys and wing mirrors with white, green, blue and black the main options.