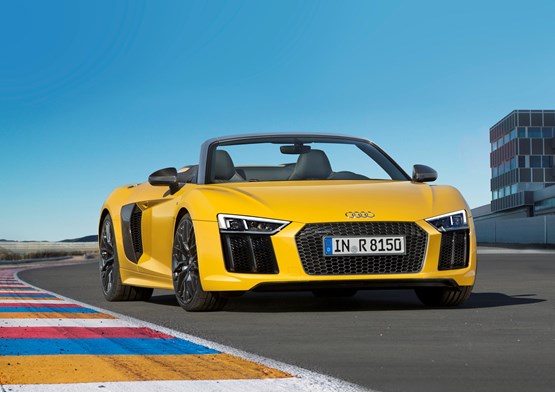 A new Audi spaceframe chassis boasts a 50% increase in torsional rigidity for the new Spyder, which claims to deliver “undiluted emotion” and a 3.6 second acceleration time to 62mph.

The new iteration of the Ingoldstadt brand’s flagship model opens for UK orders this spring, with prices confirmed closer to the time and deliveries set to take place in Q4 of 2016.

“Compared to the R8 Coupé, the engine sound in the open high-performance sports car now delivers an even more intense experience.”

With a four-wheel-drive Quattro drivetrain, the new R8 model claims to balance performance with greater efficiency.

Audi claims fuel economy on the combined cycle of 24.1mpg and CO2 emissions of 277g/km, boosted by the seven-speed S Tronic gearboxes ability to decouple and allow the vehicle to coast at speed.

The 533bhp (398lb-ft) V10 engine delivers its peak power at a heady 6,500rpm and a soundtrack which can gain added appeal with the addition of an optional sports exhaust system.

The glass rear window in the canvas hood – which can be raised and lowered in 20 seconds at speeds of up to 31mph – can be lowered to let more sound into the cabin, even with the hood in place, meanwhile.

Inside the R8 Spyder, a driver-focussed cabin a multi-function steering wheel allows most functions, including satnav, to be operated with hands on the wheel.

Audi’s 12.3-inch, fully digital virtual cockpit presents all information using rich 3D graphics ahead of the driver, with the option of a performance view which includes driving dynamics information.

MMI navigation plus with MMI touch is standard, as are belt microphones which make it easier to use voice control and the phone.

Audi smartphone interface, meanwhile, allows selected content from a smartphone to be directly projected onto the Audi virtual cockpit.

A Bang & Olufsen Sound System, featuring speakers within the seats’ head restraints, is another highlight.

Audi’s new Audi R8 Spyder opens another chapter in the Audi R8 story which began in 2007 with the market introduction of the first-generation Coupé, followed by the Spyder in 2010.

Sales of both versions have since combined to reach nearly 27,000.