Vauxhall names new SUV ahead of five launches in 2017 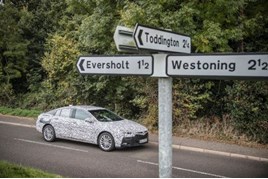 Vauxhall will add the Crossland X SUV to its current line-up as part of a five-product offensive on the market in 2017.

The new model comes as part of a clutch of new product launches throughout the new year, with images on the new Insignia having already broken cover – albeit in full camouflage.

The Crossland X will sit alongside the current Mokka X, but will attract “its own following”, according to Rory Harvey, Vauxhall’s chairman and managing director.

Harvey said: “The Crossland X will sit next to the Mokka X in our range, but their identities will be well-defined, and we anticipate that each will have its own following.

“More will be revealed at the start of next year, but we’re excited about the way Vauxhall’s crossover and SUV family is shaping up – and there’s more to come.”

Vauxhall said that it will be serving up a compelling alternative to premium models in the D-sector with the all new Insignia Grand Sport, while also growing volume still further in the SUV/crossover class with not one, but two new models in 2017.

“2017 will be a landmark year for Vauxhall,” said Harvey. “The Insignia Grand Sport will force buyers to reassess how they perceive our brand, and later in the year our two crossover offerings will bring Vauxhall to, in many cases, completely new sets of buyers.”

Vauxhall will launch a new flagship model with the introduction of the new Insignia Grand Sport, a large and practical five-door hatchback, with a coupe-like silhouette.

The new Insignia Sports Tourer will follow, taking many of its design cues from the 2013’s visionary Monza Concept.

Completing the new Insignia range will be a Country Tourer model, complete with all-wheel-drive as standard and off-road looks.

Vauxhall’s recently launched Mokka X will be joined by the new Crossland X at the start of next year.

A statement said: “The exciting crossover will appeal to buyers with families who demand agility and convenience in urban driving, but with enough comfort and performance to cover long distances at the drop of a hat.”

Completing Vauxhall’s SUV/crossover family in 2017 will be a new C-segment crossover, similar in size to the Astra and Zafira Tourer, and with an especially sporty design, the brand said.