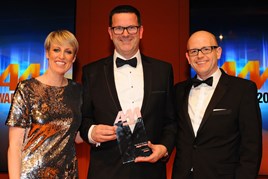 The launch of Jaguar’s first SUV has clearly gone some way to addressing any lingering concerns among UK Jaguar Land Rover (JLR) dealers about investment expectations for its side-by-side ‘Arch concept’ dealerships.

At the launch of the premium SUV in Montenegro last April, Jeremy Hicks, JLR’s managing director, wasted no time in expressing just how important the newcomer was in relation to the brand’s global ambitions.

With the orders books full for the first four months of production and 250 limited-run First Edition models already sold, he said: “F-Pace will probably be our biggest seller worldwide. It will be the vehicle that introduces a lot of markets to the Jaguar brand.”

Demand for the F-Pace is so high, in fact, that there are used First Edition versions selling for more than new.

Its four-trim line-up – Prestige, R Sport, Portfolio and ‘S’ – offers dealers a large combination of upsells, including the optional InControl Touch Pro system (from £1,710), which transforms the F-Pace into a Wi-Fi hotspot and can deliver Google Earth sat-nav imagery, 360-degree destination views and a host of online apps.

A decade ago, Jaguar was seen as a traditionalist’s brand, aimed at ‘the chairman of the board’, but the F-Pace proves it has caught up with the booming SUV market, which JLR expects to double to 1.4 million globally by 2020.

Hicks said: “It drives like a Jaguar. This is an SUV that feels like a sports car.”