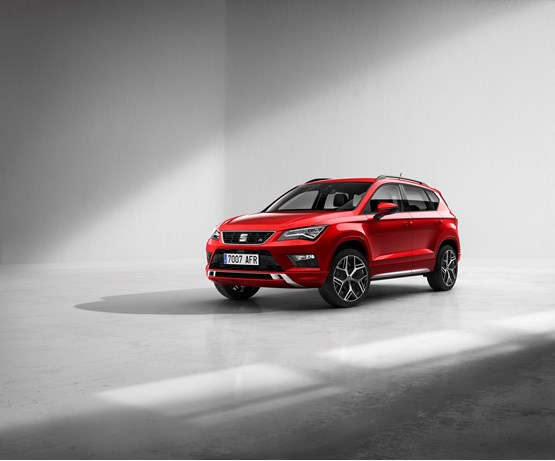 Seat is set to unveil the FR version of the Ateca at Automobile Barcelona but has pre-empted the event with the release of images of the sportiest version of its SUV.

Available with the option of a 190PS two-litre TSI turbocharged petrol engine with 4Drive all-wheel-drive system and a seven-speed DSG-auto gearbox, the FR will aim to be the most fun derivative of Ateca when it breaks cover in the metal between May 11 and 21.

FR trim will sit just below XCELLENCE trim in a line-up also featuring S, SE and SE Technology grades and will also be available with a choice of petrol and diesel engines, ranging in power from 150PS to 190PS.

The Spanish manufacturer is in the midst of its largest ever product offensive, with the Ateca itself, New Leon and All-New Ibiza and to be followed by the introduction of a new compact crossover, the Arona, in H2.

Since its launch, Seat has sold more than 40,000 Atecas worldwide.

This model, alongside the success of the Leon, Alhambra and Ibiza, contributed to SEAT achieving an operating profit of 143 million euros in 2016, the highest in the company’s history, and to finishing the year with its fourth consecutive annual sales increase.

Dr Matthias Rabe, vice-president of R&D at Seat, said: “The Ateca FR adds yet another level of excitement to our first SUV.

“The agile and precise handling of Ateca is reinforced with a touch of dynamism and fun at the wheel, with the FR trim adding for example Dynamic Chassis Control and progressive steering.”

The Ateca FR will feature exclusive  18-inch ‘Performance’ alloy wheels (19-inch machined optional), body coloured wheelarches and side skirts that come with an aluminium moulding running along the lower section of the doors.

The rear window is framed by black spoilers, with the rear spoiler matching the car’s bodywork colour.

The rear bumpers are also exclusively designed for the FR and also come in the same hue as the bodywork, Seat revealed.

Sports seats trimmed in Alcantara, aluminium pedals and red stitching all set the interior apart from the rest of the Ateca range.