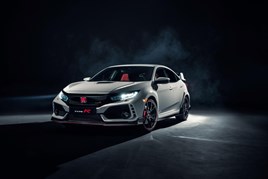 Honda has announced the pricing and specification of its new 320PS Type R hot hatch, with entry-level versions starting at £30,995.

The new flagship Civic will reach UK forecourts in July with PCP deals offering potential owners the £299-per-month repayments on a three-year 5.9% APR offer for the base specification.

Phil Webb, head of cars at Honda UK, said: “As with the previous generation, we are fully expecting a huge demand for the Civic Type R.

“The order bank is already open and we are experiencing strong interest off the back of the launch at the Geneva Motor Show in March – and this is before our customers have even taken a test drive.”

Unveiled at the Geneva Motor Show, the 2017 Civic Type R features the same two-litre VTEC TURBO engine of the previous generation car but now produces 320 PS and 400 Nm of torque.

Its six-speed manual transmission has also been further improved by the inclusion of a rev-match control system.