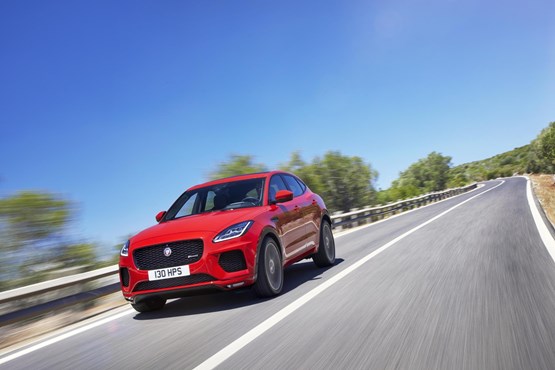 Jaguar expects its forthcoming E-Pace to become its biggest seller after unveiling the new model less than 12 months on from the launch its first SUV, the F-Pace.

The compact E-Pace – a rival to the likes of BMW’s X1 and Audi’s Q3 – broke cover by performing a spectacular barrel roll stunt at London’s Excel Centre last week and looks set to drive another dizzying sales spike for the British brand.

Since its launch last spring the F-Pace has become Jaguar’s best-seller and now accounts for half of global sales, selling 6,726 units in the UK alone to the end of June.

Now the E-Pace has broken cover and revealed the next stage in Jaguar Land Rover’s bid to sell one million cars a year by 2020.

Order books are now open for the new model, with deliveries in the autumn, and prices start at £28,500 for the entry level D150 S, with R-Dynamic variants starting at £30,750.

A single 2WD model will be offered in a range dominated by all-wheel drive variants, with a choice of four-cylinder petrol or diesel engines.

Jaguar is offering two E-Pace model lines, the E-Pace and sporty E-Pace R-Dynamic, each of which is available with S, SE and HSE specifications.

All models come with a 10-inch touchscreen interface, reducing the number of switches needed on the dashboard, while the climate control functions are accessed via rotary dials.

R-Dynamic variants have a broader range of interior colour options than standard versions of the car, as well as sports seats and other design differences.

Three versions of Jaguar Land Rover’s 2-litre Ingenium diesel engine are offered in the E-Pace, with the front-wheel drive manual offered as the only 150PS variant (D150).

A nine-speed automatic transmission is offered as an option over the standard six-speed manual on the D180, while the D240 bi-turbo diesel is automatic only, as are the two petrol versions, the P250 and P300, both using Jaguar’s new 2.0-litre Ingenium petrol engine.

All E-Pace models come with autonomous emergency braking with pedestrian detection, and there is a range of stability systems to ensure the driver remains in control in other situations where there is a risk of skidding, a trailer affecting the balance of the car or avoiding rolling when cornering severely in an emergency.

The E-pace is offered with Jaguar’s InControl connectivity features, with optional 4G wifi connecting up to eight devices, and five USB charging ports.

Gesture tailgate opening, activity key wristband (where you can safely lock the main key inside the car should you be unable to carry it, for example while surfing or swimming), and advanced head-up display are also options.