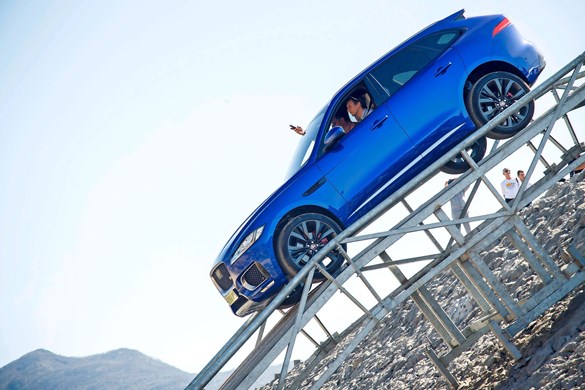 At a recent launch event in Montenegro, Jaguar Land Rover’s UK managing director, Jeremy Hicks, spoke to AM about “future-proofing” its  UK dealership network, at least in part, with a range of electric vehicles.

However, on a hillside just yards away sat the realisation of Jaguar’s last look to the future – and the manufacturer believes it is poised to become its biggest global seller.

First showcased as the C-X17 concept at the Frankfurt Motor Show in 2013, Jaguar predicts its first SUV, now named F-Pace, will win 90% conquest customers in a premium SUV market that JLR expects to double, to 1.4 million units, by 2020.

Hicks said the popular XE saloon – currently claiming about 20% market share – would continue to be the UK’s most popular Jaguar, but added: “F-Pace will probably be our biggest seller worldwide.

“It is hard for a British audience to comprehend, but this is the model that will be an introduction to Jaguar in many markets.

“Across the globe, the first car many people come to associate with Jaguar will be an SUV.”

The 250-strong run of fully-specced, £65,035 F-Pace First Edition models sold almost immediately in the UK when they opened for orders in September last year.

As the model arrived in dealerships in mid-April, new customers faced a four-month wait. Hicks said one of the key tasks would be “managing lead times”.

Three F-Pace drivetrains are available within the F-Pace range from launch, with a choice of Prestige, R Sport, Portfolio and S specifications.

A 178bhp Ingenium 2-litre turbodiesel is available with rear- or all-wheel-drive – with a choice of manual or automatic transmissions in the latter – offering CO2 emissions from 129g/km and 57.7mpg fuel efficiency in its most rudimentary form.

Claims of an 8.9-second dash to 62mph and a 138mph top speed are no doubt assisted by a lightweight chassis, which employs 80% aluminium to deliver a class-leading 1,665kg kerb weight among rivals largely weighing in at more than 1,800kg.

Both V6 engines are available only with all-wheel drive and the eight-speed ZF automatic transmission, the diesel returning claims of 47.1mpg and 159g/km, the supercharged unit 31.7mpg and 209g/km.

The F-Pace’s Key rivals will be the Audi Q5, BMW X3, Mercedes-Benz GLC-Class and Porsche Macan.

JLR director of design Ian Callum’s lines will undoubtedly give the F-Pace an initial edge in the eyes of many, but a blend of Land Rover off-road ability, Jaguar dynamics and its latest technology suite are what JLR hopes to succeed with.

The choice of rear-wheel drive or an Intelligent Driveline Dynamics all-wheel-drive system, which sends 90% of torque to the rear in most driving conditions, helps to deliver on the dynamic promise, along with torque vectoring, a system delivering minute braking inputs to inside wheels to improve cornering accuracy.

The all-wheel drive was ably demonstrated during extensive off-road driving exercises in Montenegro, which put the F-Pace’s hill descent control and All Surface Progress Control (ASPC) to the test.

Part of an Adaptive Surface Response system, which tailors the drivetrain to the terrain, ASPC operates like a low-speed cruise control at speeds of 3km/h to 30km/h, to negotiate snow, ice and wet grass.

The array of on-board sensors also equips the F-Pace with a blind spot monitor, reverse traffic detection and adaptive cruise control with queue assist, allowing the F-Pace to follow crawling traffic at a safe distance.

It’s 2,874mm wheelbase not only aids ride comfort and stability but liberates impressive rear legroom and 650 litres of boot space.

The F-Pace interior feels very much like the newcomer to the Jaguar range too.

A 12.3-inch HD virtual instrument cluster relays all the usual essential readouts as well as radio, trip computer and satnav displays via a crisp and colourful display, while an optional laser head-up display (£1,220) projects the same functions into the driver’s eye line.

The optional InControl Touch Pro system (from £1,710) functions via a 10.2-inch touchscreen. The system transforms the F-Pace into a Wi-Fi hotspot and can deliver Google Earth satnav imagery, 360-degree destination views and a host of online apps.

Anticipating that the F-Pace will reduce the average age of a Jaguar customer by 10 years, Jaguar has also ushered in the optional (£300) Activity Key.

Designed for those with active lifestyles it is a wrist band – waterproof to 20 metres – which allows the keys to be locked in the car during active pursuits. Returning to the car, a touch of the band on the ‘J’ of the boot badge unlocks the vehicle.

However, Hicks said JLR had given Land Rover dealers the opportunity to drive the F-Pace on a manufacturer trip to Miami in an attempt to “convince” them that its new creation was a sufficiently different animal to its established 4x4s.

He said: “They were blown away. Typically, they said that it drives like a Jaguar. This is an SUV that feels like a sports car.”

What your customers will read about the Jaguar F-Pace

It’s comfortable on the road and full of modern kit, even in the lower-spec versions. Don’t forget that while you can’t get the V6 engines in these versions, the Ingenium has better fuel economy and lower tax costs along with all of the grunt you’ll need.

Jaguar prides itself on segment-busting, which means its models often straddle distinct market segments. Dynamically, the F-Pace sits between the Porsche Macan and more staid rivals, in space it leads the class, and prices aren’t outrageous.

It feels like a Jaguar, which is precisely as it should be. There’s clear air between this and a Discovery Sport or Range Rover Evoque. But if you want a tall car that’s good fun to drive, this or a Macan are your best destinations.