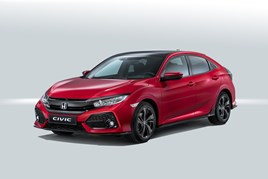 Honda is set to launch a comprehensively revised the Civic hatchback’s 1.6-litre diesel engine in a bid to improve its real-world fuel consumption and emissions.

The updated 120PS unit will join the Honda Civic range in Europe from March 2018 and is one of the first engines to be officially tested under the new Worldwide Harmonised Light Vehicle Test Procedure (WLTP) fuel consumption and emissions cycle, which comes into force this year.

The WLTP cycle was developed using actual driving data gathered from around the world in an effort to replicate the results experienced in real-world driving.

Changes to the exhaust system of the Honda Civic’s 1.6-litre turbodiesel are central to the changes and result in claimed fuel economy and CO2 emissions starting from 76.3 mpg and 99g/km under the WLTP cycle.

The improvements to the 1.6-litre diesel also include a reduction in cylinder friction, thanks to pistons made from highly durable chromium-molybdebnum steel alloy, as well as ‘super plateau honing’ of the bores to enable smoother piston movement.

The Swindon-built diesel powertrain also has a new NOx Storage Converter (NSC) system with larger catalysts and a higher content of noble metals (silver, platinum and neodymium) that store nitrogen oxide gas until the regeneration cycle.