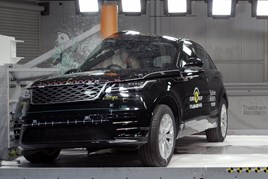 The Range Rover Velar has become the latest vehicle from the increasingly popular SUV category to shine in Euro NCAP’s safety tests – scoring a five-star result.

Euro NCAP have issued safety scores to no fewer than 15 SUVs since the start of 2016 and Matthew Avery, director of research at UK-based Thatcham Research who carries out the authority’s testing procedures, said that the sector has perform “consistently well” in impact testing.

But Avery was especially complimentary of the new Velar. He said: “The Velar not only performs well in a crash – especially in Euro NCAP’s exacting side impact test – but also in active safety, with its suite of standard-fit technologies designed to avoid the crash happening at all.”

The Velar’s 72% score for assisted safety features is 7ppts above average for the SUVs tested since January 2016.

Avery said: “Following five-star ratings for the Discovery and Discovery Sport, this is another signal from Jaguar Land Rover that safety is a priority.

“The Velar has reviewed positively and will undoubtedly be a popular car. With small SUV sales set to break the two million barrier in 2018, it’s exciting to see one of the leading carmakers in the category deliver on standard-fit active safety systems.”