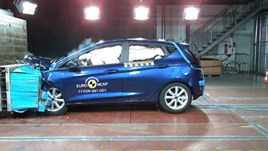 The Ford Fiesta marked 20 years since its first safety test with a five-star score as results emerged for nine new models from Thatcham Research’s latest round of testing.

Kia’s supermini Picanto and Rio hatchback both achieved three stars with standard safety equipment but were rated as four and five stars when tested with their optional safety packs.

Reflecting on the progress since the first Ford Fiesta Euro NCAP test back in September 1997, Thatcham research suggested in a statement that footage depicting impact testing from 20 years ago “does not make for comfortable viewing”.

Matthew Avery, director of research at Thatcham Research, said: “When you compare the impact testing for the 1997 Ford Fiesta with the 2017 version, you don’t have to be an expert to recognise a distinct progression in car safety over the past 20 years.

“The dummy in the 1997 model endures a heavy head-strike against the B-Pillar and there is serious intrusion in the side impact test too. The structure was just not stable. Today however, the 2017 Ford Fiesta offers far, far greater levels of protection to its occupants. What better way to demonstrate the positive impact of the Euro NCAP testing programme as it celebrates its 20th Anniversary?”

“Euro NCAP exists to help consumers make informed choices around car safety. This is especially important for top sellers like the Ford Fiesta – a car which Euro NCAP has tested on six different occasions over the past 20 years.”

Considering the findings of its most recent new car safety tests, Thatcham reported that some of this month’s cars demonstrated an apparent lack of restraint robustness in side impact testing.

In the pole test of the Jeep Compass, readings in its dummy’s chest indicated injury risk values above the limit to qualify for points, but below those which indicate an unacceptably high risk of life-threatening injury.

Likewise, in the side barrier test, the head of the dummy representing a 10-year-old child, seated behind the driver, struck the roof frame in the Mercedes-Benz C-Class Cabriolet as the side airbag did not fully cover the impact area.

In the same test with the Kia Picanto, the chest of the 10-year-old child was poorly protected.

Michiel van Ratingen, secretary general of Euro NCAP, said: “Euro NCAP is pushing for the fitment of advanced technologies and manufacturers have responded well, with AEB now commonplace on most new cars.

“However, they should not forget the basics of occupant protection in case of a crash. All occupants deserve to be equally well protected, whether they’re an adult driver or a child seated in the rear. The adoption of a 10-year-old child dummy in our test last year allows us to highlight areas for improvement, even in five star cars.”

“It is very disappointing to see Opel do away with this simple, relatively inexpensive but life-saving technology, said van Ratingen.

While the Kio Picanto scored five stars with its “Advanced Driving Assistance Pack”, it returned three-stars without.

The new Ford Fiesta achieves five stars but does not come with standard-fit Autonomous Emergency Braking (AEB) and Avery said: “That one of the UK’s best-selling vehicles is a Five Star Euro NCAP car is good news.

"However, its AEB system is only available as an option, which is a shame as fewer than 5% of car buyers take up additional safety packs. For this reason the SEAT Ibiza remains our top safety choice of the Superminis launched so far in 2017.”