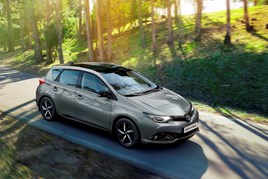 Toyota has ditched its diesel and normally-aspirated petrol engine from the Auris range as part of a focus on its “in-demand” drivetrains.

The British-built Toyota Auris range will bid farewell to its 1.6-litre turbodiesel and 1.33-litre petrol engines as part of a refresh for 2018 which will see the line-up of hatchback and Touring Sports wagon models enter the New Year with a choice of just two powertrains, a 1.8-litre petrol-electric hybrid or direct-injection 1.2T turbocharged petrol engine.

Toyota is vocally moving away from diesel.

At last month's Tokyo Motor Show executive vice president Didier Leroy said that, as current diesel models came to the end of their production lives, they would be replaced by hybrids.

Avensis, RAV4, Verso and Land Cruiser are still available with a diesel engine option in the UK, but a spokesman told AM that the diesel mix is “very small” for all but the flagship 4x4.

He added that around 80% of C-HR SUV sales had been hybrids in 2017 before adding that, even before the huge acceleration of hybrid sales over the last year or so, the diesel mix for retail customers “was 7% and will be significantly less now”.

Toyota has also taken the decision to discontinue the Auris’s Active trim grade, making Icon the new entry point to the line-up.

The 2018 Auris hybrid models are on sale from December 1 with the 1.2T versions available from early in the New Year.