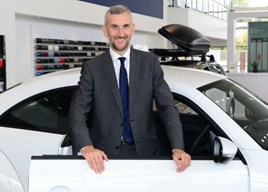 The Budget, unveiled by the Chancellor of the Exchequer Philip Hammond on November 22, included a number of measures to support the automotive sector in its transition to zero emissions vehicles, including an extension of the plug-in grant and over £400 million to improve the UK’s EV infrastructure.

But Colliers International has this week issued a stark warning to the industry to rally support for the conventional automotive sector to reinstate buyer confidence in diesel and petrol cars, which have suffered a decline in sales due to the recent increase in publicity around electrics vehicles.

Colliers International head of automotive, John Roberts, said: “There is no doubt that the future of the industry lies in electric vehicles, yet the market is still very immature and there is a lot of work still to do to prepare the infrastructure required to cater for electric vehicle usage on a mass scale.

“The increased publicity around the future of the market is causing negativity and confusion around the impact of conventional diesel and petrol combustion engines and as a result buyer confidence is being driven down and having a knock-on effect on sales nationally.”

In July, the Government announced plans to ban the sale of non-hybrid petrol and diesel vehicles by 2040 as part of its policy to tackle the rising levels of air pollution and the adverse effect this is having on the public health.

Roberts added: “The Government’s plans are clearly welcomed, however diesel and petrol engines are not being phased out completely until 2040, so there’s still more than 20 years before the changes come into effect.

“We should certainly not be seeing buyer decision making having an impact car sales so early in the process.

“Consumers need to be reassured that until the market for electric cars is mature and able to supply electric vehicles in a practical and cost effective way, they should continue to buy conventional cars with petrol and/or diesel engines.”

In October, the SMMT reported sales of new diesel vehicles had declined by 29.9% year-on-year, against an overall market downturn of 12% for the month. Meanwhile, petrol sales rose 2.7% as AFV registrations soared by 36.9%.

To support the transition to zero emission vehicles, the government has committed to regulate to support the wider roll-out of charging infrastructure; investing £200 million, to be matched by private investment into a new £400 million Charging Investment Infrastructure Fund.

They have also pledged to commit to electrify 25% of cars in central government department fleets by 2022.

The government will also provide £100 million to guarantee continuation of the Plug-In Car Grant to 2020 to help consumers with the cost of purchasing a new battery electric vehicle.

Roberts said: “This level of funding commitment is a step in the right direction but there is still a long way to go so the Government and the wider automotive industry needs to be mindful of not damaging our existing automotive retailers in the process of laying the foundations for the sector’s future.

“Until three key issues are addressed – the vehicle range of electric cars, pricing, and availability of charging points – electric vehicles are just not ready for mass market roll out and this needs to be communicated more effectively to consumers, who are being deterred from making purchasing decisions in fear of making the wrong choice.”