Renault paves the way to electrified future with new 2019 Clio 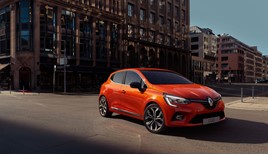 Renault will unveil a 2019 “evolution” of its Clio hatchback at next month’s Geneva Motor Show – paving the way to further electrification of its range.

Featuring LED headlights across the range and the option of a new RS Line trim, bringing a sporty new entrant to the range, the fifth-generation model will also introduce a 9.3-inch vertical multimedia screen and a 10-inch TFT digital instrument binnacle into the model’s cabin.

The new Clio is also the first new Renault to be built on the French manufacturer’s new CMF-B platform, which is designed to support its electric vehicle (EV) drivetrain, and will become the first vehicle to feature the brand's new E-Tech hybrid system as a result.

The brand claimed, however, that the 2019 Clio had been built according to the “Evolution and Revolution” principle, despite the fact that it comprises 100% new parts.

Laurens van den Acker, the Renault Group’s senior vice-president, corporate design, said: “The fifth generation Clio is very important for us as it is the best-seller in its segment and the second best-selling car in Europe, all categories combined.

“The Clio is an icon, and the latest features the very best of the previous generations. The exterior design of Clio IV won over our customers and continues to do so today, so we chose to keep that DNA while bringing modernity and elegance to the new model.

“The interior has undergone a true revolution, with a considerable improvement in perceived quality, greater sophistication and technology. It is the best Clio yet.”

Renault described the new Clio as “the spearhead of Groupe Renault’s strategic plan, Drive the Future (2017-2022)”.

Presented in autumn 2017, the plan has three key objectives:

Electric: by 2022, Groupe Renault will offer 12 electrified models in its range. The All-New Clio will be the first with its E-Tech hybrid engine based on technology developed by Renault.

Connected: also by 2022, the company is targeting 100% connected vehicles in its key markets. The Clio is said to “perfectly illustrate this momentum with its new connected multimedia system”.

Among the key traits of the new Renault’s interior, the brand said that a more compact design had been created in order to free up space and integrate more in-car technologies.

Its new ‘Smart Cockpit’ 9.3-inch multimedia screen is the biggest ever on a Renault model, however.

Turned towards the driver, the screen, with its new EASY LINK connected system, comprises all the multimedia, navigation and infotainment features as well as the MULTI-SENSE settings, all of them remarkably simple to use.

For the first time, the Clio will also come equipped with a digital screen replacing the traditional analogue display.

Measuring seven to 10 inches, the TFT screen can be used to customise the driving experience and the 10-inch version will include GPS navigation in the display.

The new Renault will be highly customisable inside and out, according to Renault.

A range of eight customisation packs, deciding on the appearance of the central console, dashboard, door panels, steering wheel and arm rests will allow potential customers to hone the cabin to their tastes.

Practicality has also been improved with a 391 litres of available boot space, which Renault claims is ‘best in class’.