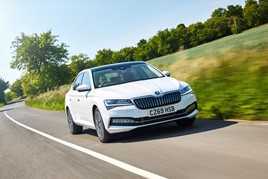 Skoda has revealed that its new Superb iV plug-in hybrid will cover 35 zero emission miles on a full charge ahead of the arrival of its new range of electrified vehicles in UK showrooms.

Skoda claims that the Superb iV will be capable of travelling up to 578 miles without stopping thanks to the combined range of its petrol fuelled engine and 35-mile EV range.

Charging takes three hours and 30 minutes from a wall box (using a wall box with a charging output of 3.6 kW) and comes ready with a three-pin charger and wall box charging cables neatly stowed under the boot floor.

Form launch, the Czech brand will offer a choice of Technology, SE L, SportLine Plus or range-topping L&K trim grades in conjunction with the new plug-in drivetrain.

Skoda launched its new electromobility sub-brand, iV, in May this year as part of its strategy to sell a quarter of its cars with electrified powertrains by 2025.

The facelifted Superb and the pure electric Citigo e EV supermini are the brand’s first two electrified models and both are expected to arrive in UK showrooms early next year.

Speaking at the launch of iV, Skoda chief executive, Bernhard Maier, said: “The right time has now come for Skoda to enter the era of electromobility. We are now able to fulfil essential customer requirements: long ranges, quick charging and – particularly important for us here at Skoda – affordable prices.

"In addition to our successful petrol, diesel and CNG engines, the new drive systems will quickly become a relevant part of our range. We anticipate that they will make up around 25% of total sales by 2025."

The German automotive manufacturing giant behind Audi, Bentley, Porsche, Seat and Skoda had previously said that it would launch 50 new EVs, but has ramped-up its planned roll-out of the new technology after signing off what it called “a comprehensive decarbonization program”.

As a result of the accelerated EV strategy, the group now anticipates that the projected number of vehicles to be built on its new electric platforms in the next decade will increase from 15 million to 22 million.

The new Skoda Superb iV features an E-mode, which prioritises electrified propulsion, as well as hybrid drive and Sport modes, the latter of which delivers maximum system performance on hybrid drive.

In hybrid driving modes, the car’s display will show the electric range available as well as the potential range if the auxiliary applications in the vehicle (heated seats, air-conditioning etc) are turned off.

The plug-in hybrid also comes with dynamic chassis control, which constantly adapts to suit the road and driving conditions.

Drivers opting for SportLine Plus or L&K trim will have Virtual Cockpit as standard – a customisable 10.25” display replacing the traditional dials behind the steering wheel.

The system can also notify the driver about traffic jams in real-time and swiftly calculate suitable alternative routes.