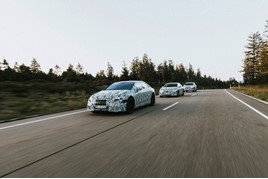 Mercedes-Benz is expanding its range of EQ electric vehicles (EV) with six new model additions to its range, the first of which are expected to arrive in dealerships next year.

The EQS, a fully-electric version of the new S Class will be the first to launch. It will be followed by the EQE executive saloon plus a pair of related SUV models.

An EQA compact SUV and larger EQB will also begin production next year.

The new vehicles will join the existing EQC and recently launched EQV.

Mercedes’s new generation of electric vehicles in the luxury and executive segment are based on a custom-developed architecture, which is scalable in every aspect and can be used across different model series.

The wheelbase and track - as well as all other system components, including the batteries - are variable, thanks to the modular design.

The EQS, which is already undergoing testing, will be available with a range of more than 430 miles and feature styling cues from the EQS Vision concept car.

"The EQS has already piled up far more than two million test kilometres from the heat of South Africa to the cold of Northern Sweden", says Christoph Starzynski, vice-president Electric Vehicle Architecture at Mercedes-Benz and responsible for the EQ vehicles.

"The EQS will be the S-Class of electric vehicles. That is why it is undergoing the same demanding development program as any other vehicle that has the privilege of proudly bearing the three-pointed star. In addition, there were quite a few tests specifically for electric cars that cover important development priorities such as range, charging and efficiency".

Mercedes-Benz wants electrically powered cars including all-electric and plug-in hybrid vehicles  to account for more than half of its sales by 2030.