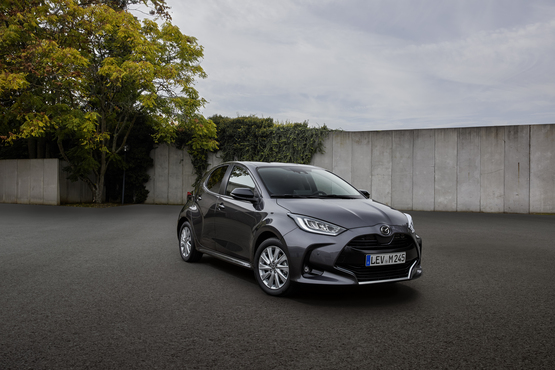 Mazda will introduce a re-badged version of the Toyota Yaris next year, known as the Mazda2 Hybrid.

It will arrive in dealerships in the spring and will be sold alongside the existing petrol-powered Mazda2.

The new car is the latest outcome of a long-standing collaboration between the two Japanese car makers and will be Mazda's first full hybrid vehicle.

It shares the same exterior and interior styling as the Yaris, while also using Toyota's infotainment system.

The Mazda2 hybrid uses Toyota’s 1.5-litre petrol engine and electric motor to deliver 116PS. It has CO2 emissions of 87-93g/km and can achieve up to 74.3mpg.

At start-up the Mazda2 Hybrid automatically runs in EV mode and, during normal driving, power allocation is adjusted between the petrol engine and electric motor for best performance and efficiency. During deceleration and under braking, energy is recovered to recharge the battery.

The Mazda2 Hybrid will be available in a choice of three grades when it arrives in the UK: Pure, Agile and Select. Specifications and pricing are yet to be revealed.

Like the Yaris, the Mazda2 Hybrid has a five-star Euro-NCAP rating and a 286-litre boot.

Toyota also has a collaborative agreement with Suzuki, which saw the introduction of the Corolla-based Swace and RAV4-based Across last year.

Next year, Toyota will also launch the bZ4x, a new electric SUV that is built in partnership with Subaru.