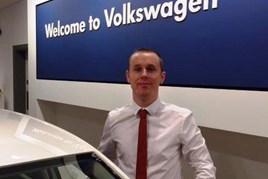 Former apprentice technician Mark Groom has been singing the praises of dealership apprenticeships after progressing to the role of workshop controller after just three years.

Groom was groomed for success after joining the Swansway Group’s Wrexham Volkswagen and said that training on the job had determined his new direction in life.

He said: “I was working in factory jobs, looking after machinery and thought that maybe an apprenticeship would be a good way to go. I applied for the apprentice technician role at Wrexham Volkswagen, got the job and I’ve never looked back”.

Groom landed his new post of workshop controller before becoming a fully Qualified Technician, although he has undergone the training, passed the tests and is now just waiting for his certificate.

He said: “The training has been amazing, the Volkswagen facilities in Milton Keynes are just fantastic and I’ve learnt such a lot.”

John McFall, aftersales manager at the dealership, said: “Mark is an impressive young man. In the three years he’s been with us he’s not had a single day off sick and never once been late. He has a thirst for knowledge and a real desire to succeed and I’m delighted that he he’s taken so well to his new role.”