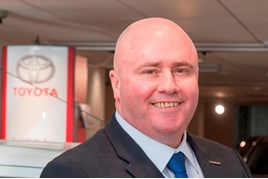 Barnes has worked with the Toyota and Lexus brands for the last two-and-a-half years, formerly running dealerships in Cumbria and the Scottish Borders for Border Motor Group.

In the newly created role, Barnes will be responsible for growing the sales and reputations of Vantage’s new dealerships in West Yorkshire – Toyota Wakefield, Toyota Leeds and Lexus Leeds - which were all acquired from Lookers in late December.

Mark Robinson, managing director of Vantage Motor Group, said: “John was the perfect choice to fill this new role in West Yorkshire. He has all the credentials needed to take the business forward along with an expansive knowledge of the Toyota and Lexus brands.

Vantage Motor Group has more than 600 employees at 25 dealerships across Northern England and the West Midlands.