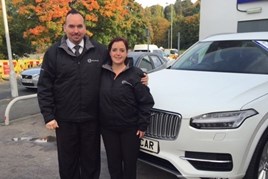 Husband and wife team Russell and Kate Naude have struck up a new relationship with Clive Brook Volvo after emigrating from South Africa – becoming the dealership’s new sales executive and service advisor.

Husband and wife Russell and Kate Naude have joined Clive Brook Volvo Bradford, located on Canal Road, after leaving their previous jobs in the automotive industry 8,500 miles away in South Africa.

“We are delighted that Russell and Kate have joined the Bradford team; they are already putting their experience to good use and have quickly become an integral part of the team.”

The Naude’s emigrated from South Africa in 2015 and now reside in Pool, Wharfedale.

Kate successfully applied for the role of service advisor in September last year.

Husband Russell has now followed after the Clive Brook team learned of his previous experience in automotive sales, even achieving the accolade as South Africa’s number one Hyundai salesman, and he was soon offered the position of sales executive.

Kate said: “As soon as I walked through the door, I immediately found a warm and inviting atmosphere, that I thought would be a lovely place to work. I was ecstatic to find out I had been offered the position of service advisor; I already feel an integral part of the Volvo family.”

Russell said: “My wife put in a good word for me even during her interview, which must have planted the seed in the heads of Steve Ward and Gary White as I was asked to come in and meet Clive shortly afterwards.

“I’m relishing my new career at Clive Brook. I’m thoroughly enjoying learning about a different product and I’m extremely grateful to Clive and the rest of the team for giving me this opportunity.”