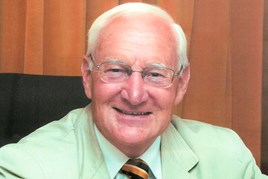 Tributes have been paid to former Furrows Group chairman John Coward after he passed away at his Shropshire home aged 78.

The motor industry stalwart joined the company, best known for its Ford, Kia, Mazda and Skoda dealerships in Shrewsbury, Oswestry and Telford as assistant to the existing Chairman in 1969, eventually taking over the top job in the 1990s.

Coward held a number of high profile regional and national posts in the motor trade, including representing Ford dealers in negotiations with the manufacturer.

He also became president of the Retail Motor industry Federation which made the industry’s case in Westminster and Brussels, as well as overseeing training across the industry and its benevolent fund.

Furrows Group joint managing director, Dave Farthing, said: “This is a very sad time for everyone at Furrows – this really is the end of an era for the Group, and our thoughts are with Mr Coward’s family.

“Mr Coward was such an important figurehead for Furrows, and he was renowned right across the industry for his knowledge and expertise, and for his calm approach to business, as well as his great sense of humour.

“He will be very much missed by everyone at all three Furrows dealerships, and we’re sure his legacy will live on following the high standards he set for himself and the business as a whole.”

Fellow joint managing director, Russ Smith, said Coward had been closely following the company’s plans for its upcoming centenary in 2018, and the Furrows team has now pledged to ensure the milestone occasion is a fitting tribute to the chairman who played such a key role in the life of the group.

Smith said: “We have been in business for almost 100 years and it’s testimony to Mr Coward’s ambition and dedication that the company has grown from that initial relationship with Ford, to now stocking Kia, Mazda and Skoda vehicles too, with a turnover of around £100 million.”

Coward is survived by his wife Jane, son Nic and daughter Rachael.

All are involved in the family business as are son-in-law Wayne Downey and daughter-in-law Vivien. He was also a devoted grandfather to Ella, Innes, Imogen and Lachlan.

Furrows will continue to be major supporters of sporting associations in Shropshire as Coward was an avid cricketer and golf club member.

He was also committed to many voluntary organisations and heavily involved in local politics for over five decades.

Coward’s funeral will take place on May 12th at St Giles’ Church, Shrewsbury, at 1.30pm.