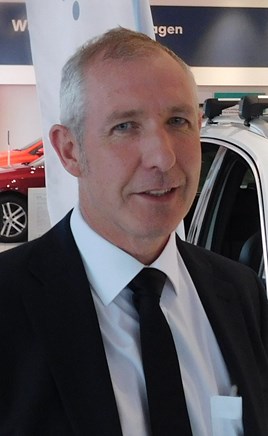 A new brand manager, James Bertram, has been appointed at Trust Group at its Wolverhampton Volkswagen centre.

His appointment follows the retirement of Paul Cooper.

Originally from Scotland, Bertram (pictured) began his career in the motor trade in 1996 at Skelly’s Motorstore in Motherwell, where he worked his way through the ranks from sales executive to operations manager, overseeing the sale of the business to Arnold Clark.

He made the move south of the border 15 years ago when he joined Carcraft at Wednesbury as general and regional manager, working for 10 years in multiple senior positions across various locations.

He said: “The challenge ahead is to engage with colleagues here at our Bilston Road site and while leading by example from the front, demonstrate that I relish getting involved.

“With support from the whole team, we will ensure that our customers receive an experience they won’t ever forget when they visit Wolverhampton Volkswagen.”

Andrew Hockedy, managing director of Trust Group UK, said of the appointment: “James is an ambitious and hardworking leader and we are confident that his enthusiasm and inspiration will drive the business to further success.”