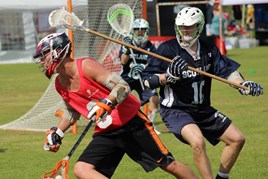 Peter Vardy digital marketing executive Jamie Fleming is preparing to swap the showroom for the sports field when he heads to Budapest to represent Scotland at Lacrosse.

Fleming, whose normal place of work is the group’s Vauxhall showroom in Motherwell, is on his way to Budapest to represent Scotland at the 2016 European Lacrosse Championships.

He has competed for Scotland at lacrosse National, European and World Championships, and has won over 50 caps for the Scottish side to date, having taken up the sport at university seven years ago.

Fleming plays for and coaches the Glasgow University team who took home the Scottish Treble in 2015/16 and will be representing Scotland in this year’s Champions League in Ghent.

Fleming said: “Representing Scotland in the number 10 jersey at this level is a huge honour, and I know the team have trained hard and will be raring to go as soon as we hit Budapest.

“We’re looking forward to competing against the best of Europe and showing them what Scotland is capable of.”

Chief executive of the Peter Vardy Group, Peter Vardy, said: “Jamie’s been a talented and committed lacrosse player since he joined us, and we’ve always encouraged him to go as far as he can. We wish him and all the team all the very best in Europe.”

The Scottish Lacrosse team is hotly tipped to win a medal at the ten-day tournament in Budapest.

The group is currently ranked sixth in the world and will face 23 teams from all across Europe, including home nations England, Ireland and Wales, from July 28th.