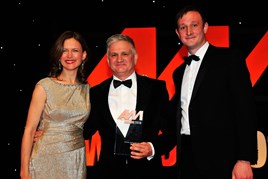 At the end of 2015, Mercedes-Benz UK’s new car registrations smashed its personal best. The 145,254 total was more than 20,000 units up year-on-year, its largest annual rise, and the three-pointed star was the top performer in the entire market for growth.

Having sat far behind  premium market rivals BMW and Audi last decade, it has rapidly narrowed the gap and is threatening to overtake by 2017.

Although fleets and company car user-choosers feature heavily in Mercedes-Benz’s customer base, the 2015 growth was balanced, with half of the increase in business coming from the retail sector. Its key performing car ranges included the C-Class, which accounted for half its additional volume, with the A-Class hatchback and GLA-Class small SUV providing much of the remainder.

The depth and breadth of its product line-up was a key factor in the AM judging panel hailing Mercedes-Benz as Manufacturer of the Year. “It makes products people want, in every sector, with amazing quality, safety and environmental considerations,” was its conclusion.

Thanks to the introduction of its latest generation of small cars – the A-Class, CLA-Class, GLA-Class and B-Class – Mercedes-Benz now features on corporate fleets for young executives and wins retail custom from 30-something professionals. A consumer can get behind the wheel of a new Mercedes-Benz for as little as £300 a month. Moreover, the brand has such depth and  breadth of well equipped products, from family cars, SUVs, coupés, convertibles and luxury transport that the same consumer could remain a Mercedes-Benz customer for life.

Its AMG models boost the brand’s appeal further  still by providing the ultimate in outright performance and driving dynamics beneath bodyshells that still relate to its everyday models, as any halo model should.

The powertrains Mercedes-Benz has developed, including petrol, diesel and now plug-in hybrid, are very efficient, and its on-board technology, for both occupant comfort and safety, is market-leading. Combining these with such an easily-recognised premium brand has proved to be a winning formula.

Products are only part of the picture, however. Another driving force behind the carmaker’s success in the UK is its chief executive Gary Savage, winner of the AM Business Leader of the Year award.

He joined Mercedes-Benz UK in 2010 and the brand has beaten its personal best for sales and market share in every year since.

Savage has driven cultural change at Mercedes-Benz UK. When he arrived he identified that the dealers were being treated like children, and were constantly monitored and measured to distraction.

He told AM: “One of the things that I was probably most struck with was that we had, as I described it back then, a sort of a parent/child relationship with the network. I felt there was a lot of latent ambition and opportunity within the network that was being probably subdued by this sense of mistrust in terms of their relationship with us, which potentially could have been predicated by the very draconian KPI measures. That’s where we put most of the focus. It wasn’t in growing, it was in measuring.”

He and his senior team put more focus on the sales results, introducing monthly volume targets for the dealers, and encouraging a more consistent approach to fleet offers. Communications with the network have been improved,  with an emphasis on improving the partnership and collaboration. Savage sees everything before it is sent out and has banned verbose, overbearing communications – the days of three-page memos are gone and presentations at the quarterly regional retailer meetings are concise.

“I’m most proud that we’ve been able to achieve this significant growth and at the same time tangibly improved the relationship with the network,” said Savage. He happily describes his dealer partners as “the best in the business”.

Savage pays a lot of attention to the twice-yearly NFDA Dealer Attitude Survey. He was concerned that, in the past, franchisees really valued having the three-pointed star above the door, but had a problematic relationship with the brand. Now, he is confident the momentum can be sustained because of such a high degree of engagement between the dealers and the manufacturer.

For the past four surveys, Mercedes-Benz has remained the highest-rated franchise.