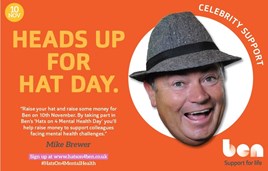 November 10 has been designated ‘Hats On For Mental Health Day’ by motor industry charity Ben, in its first campaign since its rebranding.

It hopes that dealerships, national sales companies and other UK automotive businesses will encourage their employees to wear a hat all day after donating £1 each to Ben.

The mass participation event has already won support from TV personality and car dealer Mike Brewer plus actor and Strictly Come Dancing veteran Tom Chambers to help raise awareness of its cause and the impact of mental illness.

As the charity devoted to motor industry workers, Ben said it is conscious that the industry is dominated by males, and traditionally men have found it difficult to ask for help when they’re stressed, depressed or otherwise affected mentally by personal or work issues. Suicide is the largest killer of men aged below 45 in the UK.

“Mental health problems are not always easy to recognise and diagnose, but its impact can be devastating,” said Ben’s business development director Jools Tait at the launch of the campaign on October 10, marked as World Mental Health Day.

Statistics suggest that of the 800,000 people employed in the UK’s automotive industry more than 250,000 will be affected by mental illness at some point.

The charity already helps many people access support for mental illness and works with industry partners on raising awareness.

It has partnered with BMW Group on ‘workplace resilience’ campaigns at its manufacturing sites, which employ more than 7,000 people, and on training managers about workplace stress.

Ben has launched a website with more information about Hats On For Mental Health Day and hopes participants will share their photos on social media using the #HatsOn4MentalHealth hashtag.