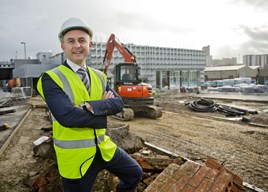 The £10.5 million centre is due to open in January.

Shield (pictured), who has been in the motor retail industry for more than 20 years, will manage the retailer’s team of 110 colleagues, of which 98 are already currently part of the Farnell team at its existing Jaguar and Land Rover sites in Leeds.

Twelve jobs, including three apprenticeships, as well as a range of positions in sales and aftersales will be added.

Farnell Jaguar Land Rover Leeds is in Sheepscar Way in the city.

On three floors, the 90,000 square-foot features roof top parking and a barista café bar for customers, alongside a new and used car showroom.

The new retailer has a ‘drive-through’ service reception, for customers to drop-off and pick-up their vehicles for a service.

Customers will also be offered a chauffeur service into Leeds city centre.

Shield started his career 23 years ago as a sales executive at a Peugeot dealership in Bradford, before being promoted to managerial positions.

He has been with Farnell for more than a decade, managing the Jaguar and Land Rover sites in Leeds, picking up Land Rover Retailer of the Year awards for three years in a row.