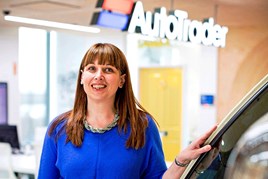 A woman central to the “complete transformation” of the Auto Trader operation over the past three years has been named as Woman of the Year at a prestigious awards event.

Auto Trader customer experience and operations director, Alison Ross, was praisede for he efforts in attracting women into the automotive and IT industries as she received the accolade at the annual Women in IT Awards in London.

At the ceremony, opened by the head of MI6, Alex Younger, she was recognised for her outstanding contribution to driving diversity within two traditionally male dominated industries; IT and automotive.

Alison has worked within the Auto Trader organisation for the past 14 years and was “the key leader in driving through a complete transformation of Auto Trader’s culture over the last three years”, according to a statement issued by the business.

Among the initiatives driven by Ross were: diversity workshops which created initiatives focused on increasing and promoting diversity and inclusion; a review of new maternity policies to help attract and retain a more diverse workforce; leading a team that has proactively supported IT in Manchester; establishing partnerships with Women In Tech, Mums In Tech and girl geeks.

Ross said: “I have been lucky to have built my career with Auto Trader. As a company we put the importance of diversity and inclusion at the heart of our culture, but things in the industry are changing fast.

“I would love to get the message out to girls and young women choosing their paths through education and employment that a career in technology is incredibly rewarding.”

Trevor Mather, Auto Trader’s chief executive, added: “All of us in the industry know that the automotive and digital worlds have a significant challenge with diversity.

“Traditionally neither are perceived as an attractive industry to enter by women or minorities. That’s why we are fiercely proud of Alison’s long commitment to educating, inspiring and attracting more women into what is unquestionably an innovative and exciting sector.

“Alison is a wonderful ambassador and role model to not only those of us at Auto Trader, but to our community in Manchester and the industry as a whole.”

Women with Drive’ initiative launched by Cox Automotive in the UK

Women with Drive’ initiative launched by Cox Automotive in the UK