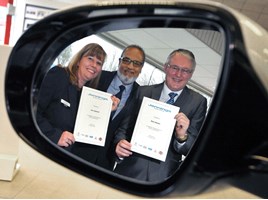 Two members of the aftersales management team at Jennings Motor Group have been rewarded for achieving a combined 65 years’ loyalty with the company – as one celebrated his 65th birthday.

Proving that age is no barrier to success in business group service and body shop manager Brian Johnston, from South Shields, marked a total of 45 years with the company on his landmark birthday.

Brian was joined by service manager, June Appleyard, from Jarrow, who marked 20 years with the business on the same day.

Nas Khan, managing director of Jennings Motor Group, said: “It was a pleasure presenting Brian and June who are the group’s first employees of 2017 to receive their loyalty rewards and certificates.

“They are both extremely dedicated members of the management team.  I would like to take this opportunity to congratulate both members of staff and Brian for reaching his 65th birthday milestone.

“Throughout the year there will be 28 members of staff celebrating a combined 690 years, which is also an incredible achievement.”

Johnston’s career in the motor industry began after leaving school at the age of 15 and he was taken on as an apprentice mechanic at the former F Routhwaite Garage on Newcastle Road in South Shields.

Johnston said: “I always knew I wanted to work in motors and being taken on as an apprentice all those years ago was the first step to the start of a very successful career.”

In 1972, Johnston was taken on as a mechanic at the Jennings Ford Direct dealership, formerly known as Selwoods of South Shields.

Seven years later Johnston decided it was time for a change and transferred from the workshops to service reception, prior to gaining experience as a workshop controller.

In 1981, he was promoted to service and aftersales manager and four years ago received another promotion to group service and body shop manager – the same position he holds today.

Appleyard’s career with the company began in 1997 when she started working on the service reception desk, in addition to the marketing department.

Now she works as service manager at Parsons Road, Washington.