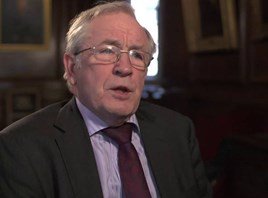 Professor Garel Rhys, the renowned motor industry expert, has died in his sleep at his home in Cardiff aged 76 years, a week before his 77th birthday.

Rhys was the chairman of the Welsh Automotive Forum, professor emeritus and president of the Centre of Automotive Industry Research at Cardiff University and an adviser to the Welsh Government on economic and automotive affairs.

Welsh Automotive Forum chief executive Tim Williams told Wales Online: “Garel’s death has been a tremendous shock to all in the forum and I know the sadness will be shared throughout the automotive community as we extend our very deepest and sincere condolences to his wife, Mavis, and children Jeremy, Angela and Gillian.

“Garel was born and brought up in the Swansea Valley but earned and enjoyed a distinguished and highly respected position in the global automotive industry so his passing will be felt around the world, where he extensively lectured and spoke at events.

“His unrivalled international standing made him the natural and really the only choice to help establish the Welsh Automotive Forum in 1997 and after it was incorporated Garel became chairman in 2001. He then fought tooth and nail to voice the concerns of the supply chain and automotive industry through some of the toughest times in recent history.

“He was a wise counsellor, often taking an alternative view to the popular train of thought on an issue, but he was invariably right in the end. Those who listened to his keynote speeches relished his presentation style of no-nonsense facts blended with that irrepressible Welsh humour and put-downs which made him so commanding and enjoyable.

“With his encyclopedic knowledge of the Welsh automotive industry from the dawn of the motor car to the present day, I think it is fair to say we will not see his like again, and he will be sorely missed by hundreds if not thousands whose lives he touched during a very full life.”

He is survived by his wife and three children.