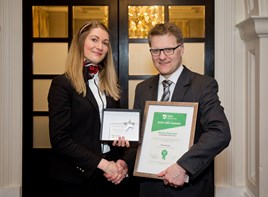 Vertu Motors has rewarded the hard work of a Bradford-based accountant with special recognition at its annual Chief Executive’s Awards.

Malwina Bartosiak, who works at Bristol Street Motors Renault Nissan Bradford, was named ‘Accountant of the Year’ at the motor retailer’s annual event, which this year was held at the luxurious Oulton Hall, near Leeds.

Every year, Vertu Motors plc, which owns Bristol Street Motors, Macklin Motors, Farnell Land Rover and Vertu Honda amongst others, honours talented managers from across the Group at its annual dinner, hosted by Robert Forrester.

Presenting Bartosiak with her award, Forrester said: “Malwina has had a terrific year that started with her taking on the challenging role as accountant at Bradford Renault and Nissan.

“This has been one of the most demanding roles in this division over recent times yet she sets about her work with an energy, commitment and enthusiasm that has been maintained throughout the year.

“It has also been a personal journey for Malwina as this was a major step up from her previous role and she has risen to the challenge and developed her own skills and leadership techniques whilst also working away from home each week.”

Accepting her award, Bartosiak said: “I have been with Vertu Motors for just over four years and seen first-hand how hard work and commitment is rewarded.

“I have also seen the high calibre of my colleagues, so to have beaten dozens of other accountants to receive this award really is an honour. It’s been a challenging but satisfying year with a lot of hard work, so I’m ecstatic to receive recognition for my efforts.”

Michael Sherwin, chief financial officer at Vertu Motors, said: “Running the accounting function across a multi-site business requires clear policies, reliable systems, but most important of all is great people.

“Our colleagues deliver support and management information to their local teams, and Malwina is a shining example of how best to achieve this.

“By constantly displaying strength of character, attitude, energy, drive and talent, she has set a great example to all of her fellow accountants.”